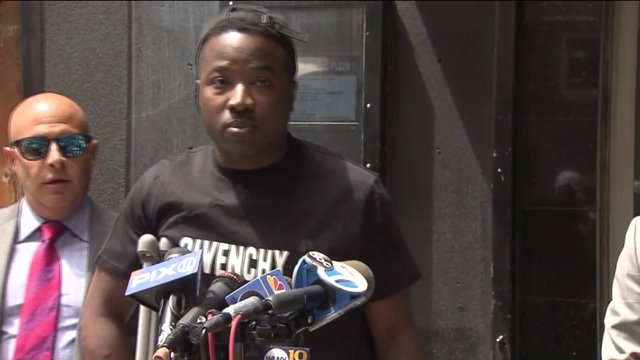 UNION SQUARE, Manhattan — Rapper Troy Ave, who has been charged with attempted murder for his alleged role in a gunfight that left his friend dead at a T.I. concert, is suing Irving Plaza for letting a gun get inside the venue, his lawyer said Monday.

The lawsuit alleges that Irving Plaza and the concert giant that operates the club, Live Nation, had poor security measures in place and allowed a gun to enter the venue — which ultimately led to the shooting, according to paperwork filed Monday in Kings County Supreme Court.

Ave was joined by a lawyer during a brief press conference to announce the lawsuit Monday.

“As we told you day one, Troy did not bring a gun into this venue,” lawyer Scott Leemon said.

Any guns used during the deadly shooting back in May entered the venue through the back VIP entrance, where security did not pat people down, Leemon alleged.

If not for this lack of security, "Troy would never have been shot and none of the incidents that took place that night would have happened," Leemon said. "He is the victim here."

As reporters sought Troy Ave's comments on the incident, and the death of his bodyguard and friend Ronald McPhatter, his only statement during the news conference was: “I’m going through a lot. I just want to get my life back.”

The Brooklyn-born performer, whose real name is Roland Collins, was released on $500,000 bond in July and is now forbidden from entering clubs, bars, arenas or stadiums.

Monday's developments come more than two months after a shootout left McPhatter dead and two others injured. Surveillance video captured Troy Ave firing a gun as he exited the green room at the concert venue.

The rapper was shot in the leg during the incident and appeared in court on two occasions in a wheelchair. He was using crutches during the latest press conference.

Officials have said they are seeking an additional shooter who is suspected of injuring the rapper and killing his bodyguard.