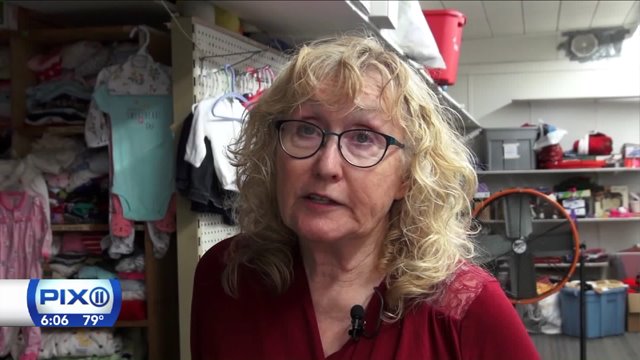 NEPTUNE, N.J. — Rebecca Blonski has nine children, seven of them are adopted, but she provides for upwards of 5,000 New Jersey children and mothers through her non-profit, Madonna House.

After a trip in the 1980s to adopt her son John from Suarez, Mexico, she knew something had to be done.

"He was one of 13 children and half of his brothers or sisters had died from starvation or lack of sanitation," she said.

When she returned she began collecting donations of children's clothing, diapers and toys. Nearly 30 years later, Madonna House has grown exponentially. Mothers and children line up in her waiting room for volunteers who bring them armfuls of baby formula and other essentials. Madonna House accepts no government funding, according to Blonski, and their income is solely reliant on donations and money made through an adjoining thrift store.

"The poor are just in a situation many don't understand," she said. "I just love what I'm doing."

Last month, Madonna House was nearly shuttered when a balloon mortgage payment became due. Blonski got a letter warning she had a month to come up with $135,000.

After months of trying, a local bank finally agreed to grant them a new mortgage to pay off the old one. But just as Blonski was about to sign the paperwork, she got a call from her accountant that a woman wanted to meet with her.

After years of paying it forward to those in need, an anonymous donor arrived at Maddona House and handed her a $135,000 check in her hour of need.

"I was just awe struck. I didn't know what to say," she said.

"She is such a gift to the community and she wants to remain anonymous, but people don't realize what a gift she's given to them by helping us stay open."