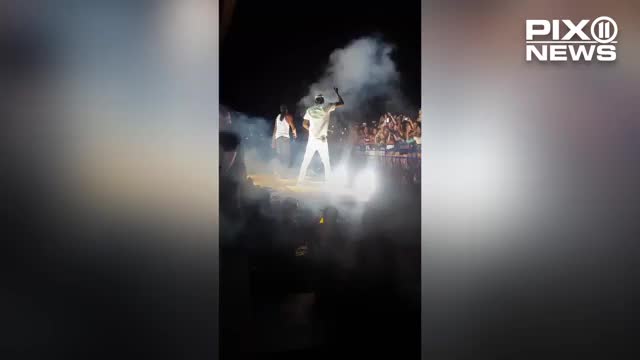 CAMDEN, N.J.— More than 40 people were injured when a railing collapsed during an outdoor concert by Snoop Dogg and Wiz Khalifa in southern New Jersey.

A partition separating concertgoers from the stage at the BB&T Pavilion in Camden, New Jersey, collapsed, causing people to fall onto the concrete below. It happened shortly before 10:30 p.m. Friday.

Camden County officials tell WCAU-TV  that 10 to 15 people were hurt and five were taken to hospitals. Their conditions weren't known and the number of injured could increase.

The railing was separating a sloping lawn from a covered portion of the concert hall. The lawn is several feet above a concrete walkway.

Concertgoer Katie Colbridge says the concert, which was about halfway finished, stopped abruptly when the accident happened.

It was later canceled.

Yikes! This just happened at the Wiz and Snoop concert.. pic.twitter.com/Vlp5Fk23Xt

So this just happened at the snoop and wiz concert nj pic.twitter.com/YP2uFQJiy8