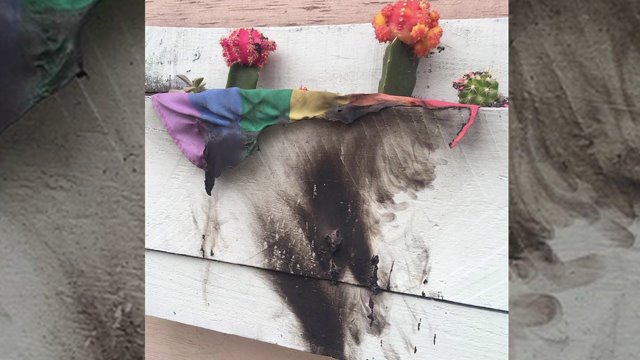 JERSEY CITY -- Anatalie David was beside herself when she discovered that someone set fire to a rainbow Pride flag that was draped outside her beauty salon The Hair Room in Jersey City.

“Immediately my heart sunk, I was sick to my stomach,” David recalled to PIX11 News.

“You would never imagine it – Jersey City is so accepting, there’s such a diverse group of people [here] and it was just completely shocking that it happened.”

The apparent act of arson happened over the weekend, just a month after David opened the business along Montgomery Street.

The flag was a remnant of a June 14 vigil where thousands gathered along Newark Avenue to pay tribute to the victims of the Pulse nightclub shooting in Orlando.

David found the flag on her stoop, draping it on a flower box as she believed it was meant to be there.

“People come and take pictures in front of it,” David said. “I have some chairs sitting outside – you know it felt like this positive piece of energy that was sitting there until it wasn’t.”

The incident, which is under investigation, baffled many in the neighborhood.

Jersey City is ranked number one in the Garden State when it comes to LGBT-inclusive laws and policies.

"Jersey City has the largest LGBT community in the state and we are saddened to see this kind of hate, which we know is not representative of Jersey City,” he said.

“I hope they find peace, I mean clearly there’s something that is in their heart that they’re struggling with because if someone is a kind and gentle person they don’t have the mentality to go destroy someone’s property.”

As the Jersey City Police Department continues on with their investigation, reviewing surveillance footage from nearby businesses, David has plans on collaborating with a local LGBT artist to replace the burned flag with a larger tribute in the coming weeks.