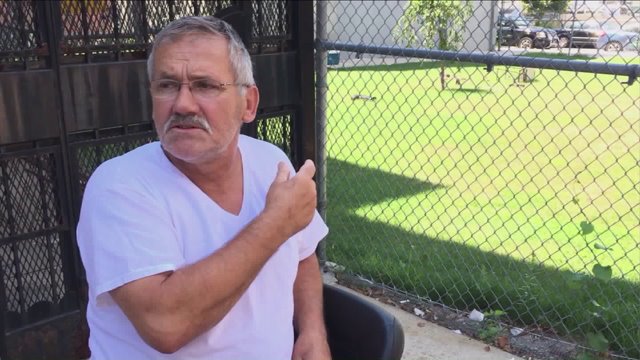 RED HOOK, Brooklyn — Louis Formisano is the type of guy who likes to take care of his neighbors and neighborhood.

In the winter he drives around in his plow looking to dig out people stuck in the snow.

In the spring and summer he gives out hot dogs outside his home. He's even helped fill potholes.

So after trying to go through the red tape to clean up a vacant lot on his block, he finally decided to clean it up himself.

Neighbors say the empty lot on the corner of Columbia and Woodhull streets needed the clean up.

"It looked like hell," said Roger who works right next door. "It was rodent infested."

Formisano said items in the lot ranged from refrigerators to rodents.

Despite the undeniable improvement, a neighbor called the city and reported Formisano for trespassing.

The Department of Housing and Development put a padlock on the gate and told Louis to hit the road and take his things with him.

His things? A riding mower and some Christmas decorations he used to decorate the lot each year.

HPD accused him of cutting a city lock and using the lot as his own backyard, which Formisano denies.

In a statement a spokesperson the department told PIX 11:

"This particular lot is pegged for future development that will bring much-needed affordable housing to the Red Hook community. In the interim, we ask that everyone respect the barriers surrounding this lot and refrain from using the site for their own personal use."

Now that he's been kicked out, Formisano says he's worried that it won't be long before the lot becomes a garbage dump again.

"You're not hurting me. You're hurting the people on the street. These people spend millions of dollars on these houses."

With no timetable for work to start on the affordable housing project neighbors say they're also worried the city won't keep up the clean up Louis started.

"They really don't clean the lot the way it should be cleaned," said Roger.

Despite his intentions, HPD stands by the fact that Formisano is trespassing on the property.

Formisano says he's okay with that as long as it doesn't become an eyesore again.

"I want it to be a garden, a park, something that will make the block look nice," said Formisano.