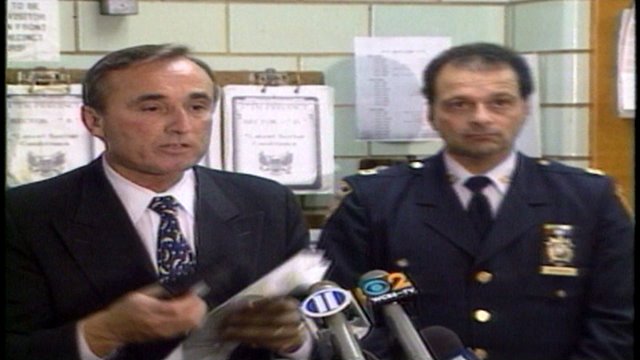 NEW YORK — William Bratton's resignation was announced Tuesday after his second stint as New York’s police commissioner, but he's leaving behind a legacy of crime fighting that has radically changed life in the city.

Bratton, who previously confirmed he would not stay on the job past 2017 , first helmed the department in 1994 under then Mayor Rudolph Giuliani. He had previously led the Boston Police Department. The top cop resigned from his New York position in 1996 following reports of disagreements between Bratton and the mayor over who deserved credit for the drop in crime.

The commissioner, 68, first entered law enforcement as a Boston police officer in 1970. After several years of working his way up the ranks, Bratton moved cities and became head of the New York Transit Police in 1990. He led 4,000 officers before taking over as the city's police commissioner.

Twenty years ago, crime dropped to the lowest levels since the 1960s during Bratton's time leading the NYPD. During his first tenure, Bratton gained a reputation as an innovative crime fighter. He brought quality-of-life policing to New York and developed Compstat, a computer based crime-fighting system.

Bratton left the East Coast for a seven-year stint as police chief of Los Angeles. After that, he worked on his two companies, The Bratton Group and Bratton Technologies. Bratton recused himself from the private sector after New York City Mayor Bill de Blasio asked him to step back into his old shoes as commissioner in 2013.

“The only challenge there is to give up an awful lot of money, to do it,” Bratton said at the time . “No basically it’s much the same as any official who comes from the private sector, I’d have to step off all of the board of directors positions I’m on paid or unpaid, my two companies I would have to put into blind trusts similar to what Mayor Bloomberg had to do.”

“As the former police commissioner of Boston, Los Angeles and New York, Bill Bratton took on and successfully reined in historically high crime in some of the nation’s largest cities,” Cuomo said.

Bratton returned to his old job with three goals : maintain low crime rates, work to counter terrorism and bring police and community together.

“I will work very hard and will move very quickly to getting once again, legitimacy and trust between the citizens of this city who feel that they don’t have it between them and this police department,” Bratton said.

His biggest challenge, and one New Yorkers didn't believe he could manage, was carrying out de Blasio's campaign promise to reform the NYPD's stop and frisk policy. The controversial policy had spiked in L.A. under Bratton.

But the number of annual stop and frisks did fall under Bratton in New York. There were about 200,000 cases of it in 2013 under then commissioner Ray Kelly. Following a 2014 court ruling that the policy violated the 14th Amendment, Bratton brought the instances of stop and frisk down to about 50,000.

"I think Bill Bratton is doing an extraordinary job as police commissioner," de Blasio said at a news conference last week. "And we are truly unified in our vision for safety in this city. And, as long as I am mayor, I welcome him to continue being police commissioner."

As with many public officials, Bratton has faced backlash. As recently as Monday, activists gathered at City Hall Park and made several demands, including a call for his resignation.

Details on Bratton's resignation were not revealed by sources Tuesday, but the news comes one week after he told the New York Times he would not stay past 2017, and may leave sooner.