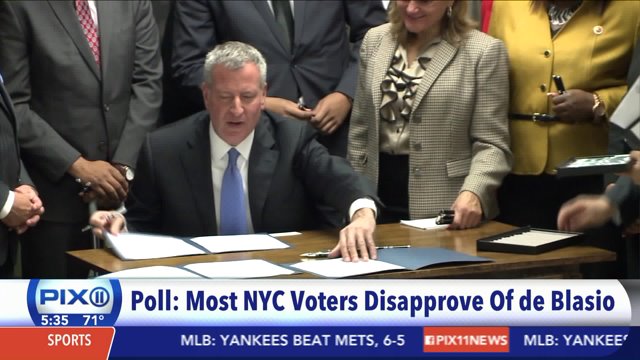 NEW YORK – Mayor de Blasio has had a tough year with an ongoing federal probe into his administration, resignation of his press secretary and public feud with Gov. Cuomo, but now voters are saying they're not happy with him either.

Quinnipiac University conducted a telephone survey with 1,310 New Yorkers from July 21 to 28. The poll has a margin of error of plus or minus 2.7 percentage points. This new poll is in line with the one Quinnipiac conducted in May – when they found a 51 percent disapproval and 42 percent approval.

Not much has changed in how New Yorkers feel about the hizzoner in the past few months.

De Blasio is expected to run for a second term in 2017. As unpopular as de Blasio might be, possible rivals don't fare much better.

However, neither Quinn nor Stringer have declared their candidacies.