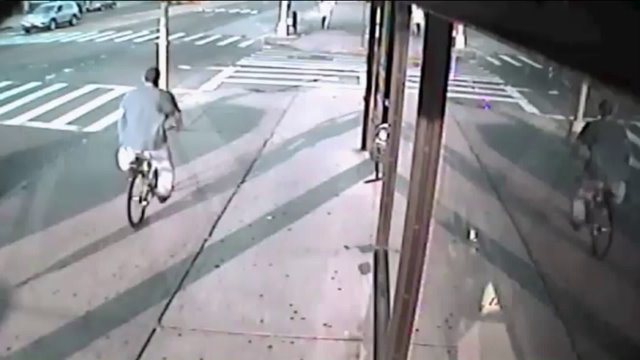 QUEENS, N.Y. — Police are searching for an elusive thief who travels by bike and has stolen 11 cellphones over the past month.

The incidents began in late June. On Saturday, June 25 around 11 p.m., the man rode past a victim on his bike near Elmhurst Avenue and 92nd Street and snatched her iPhone 6 Plus from her hands as he went. He continued north on 92nd Street.

A few hours later at 2:30 a.m., the man rode past another residence on 92nd Street and grabbed a victim's iPhone 6 from his pocket. The man then fled toward Roosevelt Avenue, police said.

Days later, on July 8, the man was off his bike and walking near 37th Avenue and 99th Street when he approached another man and snatched his iPhone 5 out of his hands. He then ran west on 37th Avenue.

On Sunday, July 10, the man again rode his bicycle past another victim on 37th Avenue, this time grabbing another iPhone 6 Plus from the victim's pocket. The victim kicked the back of the man's bike which made him drop the phone. The victim got his phone back and the man fled south on 95th Street empty handed.

Six days later, the man stole an iPhone 6S after riding his bike past a victim on the corner of 37th Avenue and Junction Boulevard, police said.

24 hours later, the man was again riding his bike, this time on the corner of 35th Avenue and 93rd Street. He snatched a Samsung Galaxy S7 Edge from another victim.

The next day, July 18, the two-wheeled bandit was riding his bike near the corner of 37th Avenue and 74th Street at 1 a.m. when he rode past yet another man and grabbed his iPhone. He sped off down 74th Street.

Two days later, the man struck again at 95-11 Roosevelt Avenue in broad daylight. He rode past a man and stole his Samsung Galaxy Note 3 right out of his hands. He took off with the phone and rode north on 95th Street.

Then a few days later on Friday, July 22, the man snatched another Samsung Galaxy S7 Edge from a man's hands as he was standing on the southeast corner of 37th Avenue and Warren Street around 11 p.m. He rode east with the gadget in hand.

Six days after that, the man struck in the evening on the northwest corner of 104th Street and 37th Avenue, snagging a Samsung Galaxy 6H from a victim's hand. The bandit rode west on 37th Avenue.

On Friday, the man struck yet again, this time outside 72-12 Northern Boulevard. He stole a Samsung Note 4 from a man's hands and rode southbound on 74th Street.

Then Saturday morning, the man allegedly snatched his newest gadget when he rode past a victim at 34-23 103rd Street and stole a Samsung Galaxy Edge 6 from the victim's hands. He rode toward Roosevelt Avenue.

No injuries were reported in any of the incidents.

The man can be seen in surveillance video obtained by police and released to the public.

If you have any information related to these incidents, submit tips to police by calling Crime Stoppers at 1-800-577-TIPS (8477), visiting www.nypdcrimestoppers.com, or texting 274637 (CRIMES) then entering TIP577.