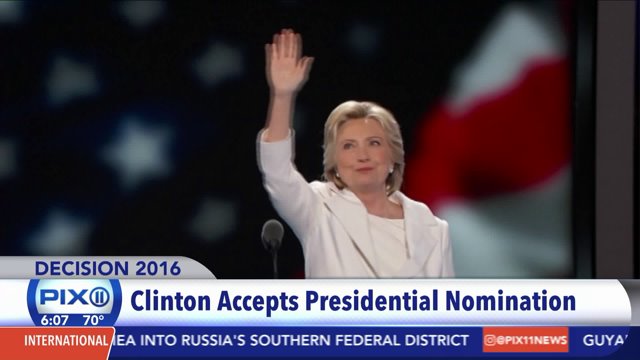 PHILADELPHIA — Hillary Clinton made history on Thursday when she became the first woman to accept the Democratic nomination for U.S. President, saying the "world is watching" the upcoming election.

In contrast to her rival Donald Trump who promised "Americanism, not globalism," she pledged to stand by NATO allies "against any threat they face, including from Russia."

"You want a leader who understands we are stronger together when we work with our allies around the world," she told an enthusiastic crowd.

On social media, many women reacted positively to Clinton's acceptance -- what some users dubbed "feminist Christmas."

Former talk show host Oprah Winfrey was among the scores of international celebrities who jubilantly tweeted their endorsement of Clinton's speech, saying she always believed she'd live to see a female nominee.

Former Australian Prime Minister Julia Gillard, her country's first female leader, wrote a strong endorsement of Clinton in the New York Times earlier in the week. "The next generation of potential female leaders is watching," she wrote.

"Hillary Clinton" dominated search traffic during the convention, reaching its highest point in her lengthy political career according to Google Trends Twitter account.

Clinton wasn't the only trending topic after Thursday's convention, though -- Morgan Freeman's voice-over in an introductory video for Clinton, before her speech, had social media users joking "God has spoken", referencing Freeman's role as in the film "Bruce Almighty."

"When in doubt, summon the voice of God," KCBS journalist Doug Sovern wrote on his Twitter.

Clinton has been well supported during the convention by a series of speakers who have sparked international reactions.

Newspaper editorials praised the speech by First Lady Michelle Obama, which was shared thousands of times online, saying it had been a powerful endorsement for Clinton.

"Michelle Obama stole the show at the Democratic national convention last night, drawing a powerful parallel between her role as the first black first lady, and Hillary Clinton's bid to become the first female president," British paper The Times wrote on Tuesday.

"Here, at last, the profound, moving and devastating riposte to Donald Trump that many in America, and the world, had been waiting for," the Guardian's David Smith wrote.

Muslim American Khizr Khan, who lost a son in the Iraq War and asked Trump if he had read the U.S. Constitution, provoked strong reactions online including from musician Josh Groban. "I'm gonna be weepy. Such a spirit of love and inclusiveness," he wrote on Twitter.

Meanwhile Joe Biden's speech on Wednesday night, in which he brutally slammed Trump's compassion for the U.S. middle class a 'malarkey', sent searches for the word 'malarkey' soaring more than 19,000% on Google.

The word is almost a catchphrase for the Vice President, who has used it repeatedly over almost three decades, including during a debate during the 2012 election.

Clinton and her convention had their share of detractors too -- China's Global Times said U.S. democracy "myths" had been "ruined" by the Wikileaks release of Democratic National Committee emails on Monday, which showed alleged intervention in the Democratic primary process.

In an editorial, the Chinese government publication said the scandal could prove Hillary a "crook".

"This e-mail gate [sic] has exploded many myths of American democracy. Perhaps there is no magical system at all," the paper wrote.

Wikileaks regularly tweeted throughout the convention, including during Clinton's speech, at one point hitting back at criticism from Edward Snowden for not curating their leaks

"Opportunism won't earn you a pardon from Clinton," they tweeted at the controversial former CIA employee.

Despite being one of the most commonly featured countries during the Democratic Convention, Russia's only official comment was foreign minister Sergey Lavrov saying he denied being involved in the hacking of DNC emails.

When pressed, Lavrov said he didn't "want to use four-letter words".