Success against ISIS could lead to more terrorism in US: FBI Director James Comey 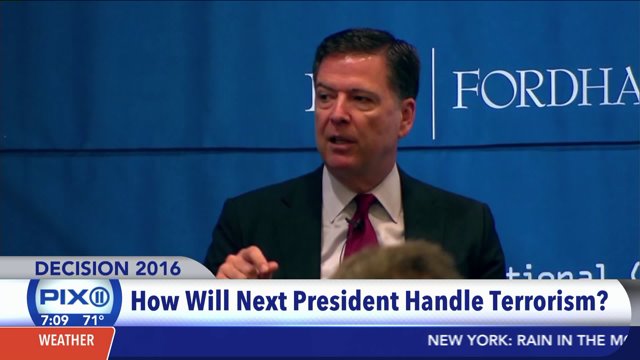 Speaking to a cybersecurity conference at Fordham University Wednesday, Comey predicted that eventually crushing ISIS in its self-proclaimed caliphate in Syria and Iraq will likely result in dispersing terrorists elsewhere.

"At some point there is going to be a terrorist diaspora out of Syria like we've never seen before," Comey said. "Not all of the Islamic State killers are going to die on the battlefield."

The FBI director's warning that the collapse of the caliphate will mean increased attacks in Western Europe and the United States mirrors a consensus among intelligence officials.

Comey compared it to the formation of al Qaeda, which drew from fighters who had been hardened and radicalized fighting the Soviet Union in Afghanistan in the 1980s and early 1990s.

"This is an order of magnitude greater than anything we've seen before" Comey said. "A lot of terrorists fled out of Afghanistan... this is 10 times that or more.

"We saw the future of this threat in Brussels and in Paris (attacks earlier this year)."

And just not in the West. There have recently been stepped up ISIS attacks worldwide, including in countries near its home base territory that has been shrinking due to military losses in Iraq and Syria.

In the last several weeks, there have been mass casualty killings at a nightclub in Orlando, Florida; the Istanbul airport in Turkey, a café in Bangladesh, a market in Baghdad, the Bastille Day celebration in Nice, France; a protest in Afghanistan and on Tuesday, the murder of an elderly priest in Normandy, France, all carried out by ISIS fighters or in the name of ISIS.

He notes that the fracturing of authority in Iraq, Syria and Yemen has produced a massive migration of Muslims from those regions to Europe, which prompted reactionary political parties there to rail against them.

In France they live in largely segregated communities where youth unemployment can run as high as 45%.

"Many French Muslims live in grim banlieues, the suburbs of large French cities (similar to housing projects in the United States), where they find themselves largely divorced from mainstream French society," Bergen writes. "All these feed into ISIS' narrative that Muslims are under attack by the West and also by the Shia as well as by any Muslim who doesn't share their extremist ideology."

CIA Director John Brennan recently told Congress it was still critical to take away ISIS' safe haven territory because it gave the group a base for training operatives and raising revenue.

At the end of May, ISIS' chief spokesman and ideologue, Abu Mohammed al Adnani, tried to reframe how ISIS defines victory. In an audio message, he said defeat would not result from losing control of cities but from "losing the will and the desire to fight."

One Western counterterrorism official predicted "a metastasis of terror as it becomes increasingly difficult for ISIL (another acronym for ISIS) to hold on to core territories."