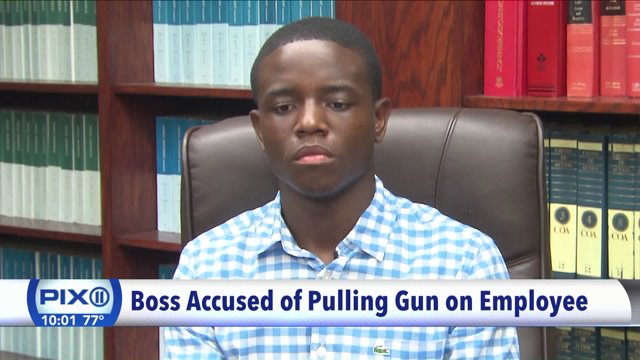 HEMPSTEAD, N.Y. — Marc Jean said what began as a normal day at work Friday morning as a car salesman at Garden City Jeep Chrysler in Hempstead, Long Island, quickly turned into a surreal and frightening encounter in the unlikeliest of places — inside his manager’s office.

The 22-year-old salesman said the general sales manager, Mike Volonakis, pointed a gun at him in his office.

“While pointing a gun in my face, he said, 'does this look familiar,'"Jean said.

He walked out of the dealership and called his mother, who then told him to call the police.

“I pushed his hand away. I said, everybody’s face in the room changed…including me,” said Jean.

When PIX11 News called the Hempstead Police Department, the supervising officer confirmed the co-worker, named Ken Skeen, had brought in the guns and was allegedly planning to go to the gun range. He's been charged with weapons possessions.

Hempstead PD also confirmed Volonakis who allegedly drew the unloaded weapon, aimed it at Marc’s head, and insultingly asked him, “does this look familiar," has also been charged only with weapons possession.

Skeen and Volonakis were also given desk appearance tickets.

PIX11 visited the dealership some 12 hours after the encounter, but the night supervisor had no comment.