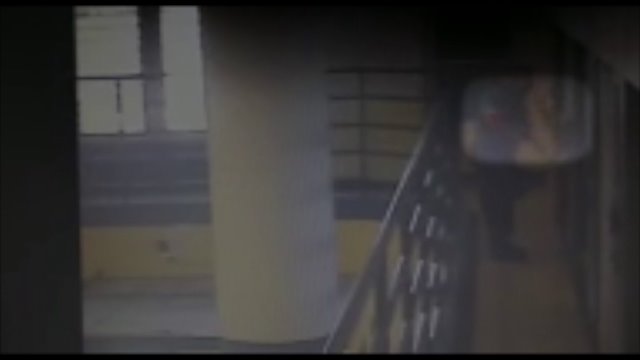 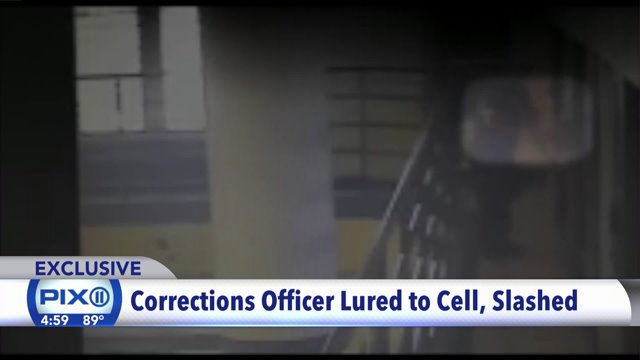 RIKERS ISLAND — The Otis Bantum Correctional Center is on lockdown after a Rikers Island inmate slashed a correction officer in the face Wednesday when another prisoner apparently lured him to a cell.

The correction officer was securing cells during a facility lock-in around 11 a.m. when an inmate came over and lured him to a cell down the hall, a source told PIX11 News. As the officer stood in front of the cell, the inmate, who was behind bars, reached through the tray slot and slashed him with a razor blade, the source told PIX11 News.

The officer sustained a laceration to the left side of his face. In the video, the officer is seen touching his face after the slashing and calmly walking away.

The officer was taken to a local hospital and treated for the slash wound.

A guard was slashed inside Rikers Island.

The inmate was arrested and charged with assault, according to the Department of Correction.

Sources say the inmate, Jimmy Lugo, 20, is a gang member.

The weapon used in the slashing was not recovered at the scene, according to a source. The correctional center was quickly placed under lockdown as officials search the cells for weapons.

"I am outraged by this serious assault. Attacks against the hardworking men and women who serve in our department will not be tolerated. We immediately arrested the inmate, who is facing serious charges. Safety is our top priority and we will continue to take every step to ensure the safety and security of our staff and inmates. As part of our comprehensive reforms, we have already tightened search procedures to keep out weapons and other contraband, bolstered security camera coverage and added emergency response teams to each facility to get to officers faster if they are in danger. As we have previously done, we will continue to seek a change to state law in order to authorize the use of body scanners, which we already own. The scanners can detect the type of weapon used by this inmate."

Correction Officers' Benevolent Association also released a statement on the incident, calling it a "horrific attack":

“Following last week’s vicious beating of an officer by an inmate, comes yet another horrific attack on a Correction Officer today. These inmates are emboldened because they simply do not fear the consequences of assaulting a member of law enforcement. Officers are being cut, stabbed, punched, kicked, and sexually assaulted, and in far too many instances, inmates are getting away with their crimes behind bars. We need vigorous prosecution in these cases, mandatory consecutive sentencing, policies from the Board of Corrections that make sense and judges who don’t tie the hands of Officers.”