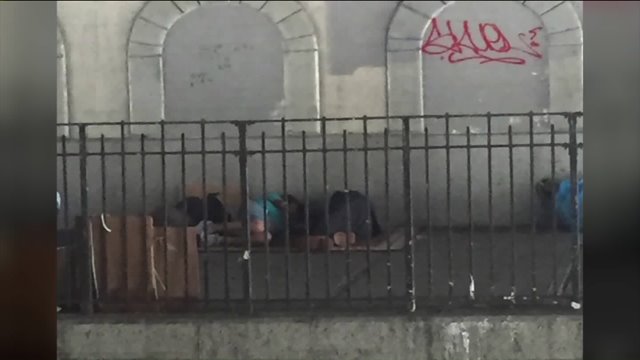 JACKSON HEIGHTS, Queens — He may have been joking when he said it, but Rodrigo Salazar said he's desperate for help. So he suggested Pokemon Go make the area under a Queens overpass a "stop" to attract visitors to a neighborhood problem.

Salazar said for the last six or seven months 35th Avenue, between 65th and 69th Streets in Jackson Heights has become an eyesore with trash and encampment for the homeless.

He tells PIX11 he's called 311 about the problem. Seventy-one complaints show up on his 311 app with the same issue.

"You wouldn't want your wife, your daughter, your older grandfather to pass by here," said Salazar. "I don't want to make this a funny thing to homeless guys because they need help they need services. I just want a way to get some publicity for this."

In a statement to PIX11, the Coalition for the Homeless said:

“This idea may be well intentioned, but it is ill-advised. Digitally tracking and publicly listing the locations of homeless people has proven too often to endanger them. If you see a homeless person and want to help, call 311.”

A city spokesperson calls the suggestion of making this area a Pokestop "flippant" and said it undermines city efforts to protect the homeless.

The DHS, also weighed in saying:

"This location has received consistent, dedicated attention from our outreach teams, including in March 2016 when we engaged clients, addressed their needs and removed garbage from the area. Subsequently, there have been 12 separate outreach team visits since that time. Our outreach includes sustained efforts to build trust with New Yorkers living on the streets, help them understand the resources available and connect them to shelter and services.”

Salazar said he wasn't entirely serious with the Pokestop suggestion but said it's already worked to get attention.

The Department of Sanitation had workers cleaning up the area Wednesday morning. Salazar says while he's thankful for it, he and other Jackson Heights residents want to see a more permanent solution to the problem.