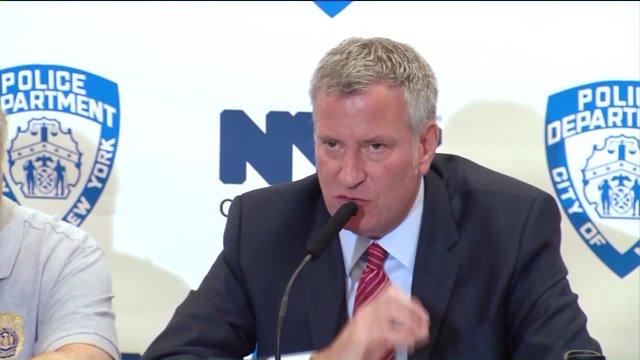 NEW YORK — The heatwave in which the tri-state finds itself Monday is being felt in at least two inconveniencing ways.

The first involves conditions indoors while the other involves outdoors conditions.  Both seem to make many residents less than happy and considering violating actions recommended by authorities.

One thing not in dispute is that it's hot, with not much in the way of relief in sight for the next 24 hours.

"At one time I couldn't breathe at all," said construction worker Luis Rivera, about the overwhelming heat and humidity in which he had to work on Monday.  "I prayed and I felt a little better," he told PIX11 News.

Having endured a day with temperatures in the low- to mid-90s, and facing the prospect of more to come on Tuesday and possibly Wednesday, he headed home but contemplated staying there for the time being.

"I'll probably stay home," he said about his Tuesday and Wednesday plans.  "I felt really bad [today] and can't go through this again."

He plans to have his air conditioner running as he tries to keep cool, like so many others in the tri-state.

That level of coolness is in sharp contrast to what Mayor Bill de Blasio requested of residents late Monday morning.

"No one wants to go through another blackout. And no one wants to have their building without power," he said at a news conference to a question posed by PIX11 News.

"You can do something about it," the mayor continued.  "Put up with a little less comfort, 78 degrees, you’re still going to be okay."

"Imagine if every single human being cranks up the air conditioning," the mayor went on, "you’re unfortunately running a big risk of a blackout for all of us."

Most people that PIX11 News asked about the 78 degree threshold were less than ecstatic about it.

"That's very hot," a woman on her lunch break in Long Island City said.  "What about the elderly? Not a good idea at all."

A man sweating on his way to the Court Square Diner was also critical of the mayor's request.

"Let him sit in 78 inside and see how he likes it," he told PIX11 News.  He added that the greater problem is capacity in the Con Ed system that serves the city.

He said that the grid needs to be able to handle more households leaving their air conditioners in the 60s. "It's what my wife likes," he said.

For his part, Mayor de Blasio had made his request during a news conference on a variety of topics in the lobby of the 84th Precinct in Fort Greene, Brooklyn.  It was cooled to 78 degrees or higher.

A number of other residents who spoke with PIX11 News said they didn't mind the 78 degree bar.

Queens resident Grace Gao said that she's originally from a part of China, near Hong Kong, which is tropical.  "This is okay," she said about the weather, and the 78 degree threshold to fight it.

Another effect of the hot weather is parched vegetation. Lawns, gardens, trees and other plants around the region are brown and wilting.

It's the result of drought.  In New York, below average precipitation for most of the last nine months has led to a state government-ordered drought watch.  In addition, New Jersey ordered a drought watch on Monday afternoon after it posted rainfall that's 40 percent below average for the last three months.

It's the first time since 2002 that a drought watch had been in place in New York. Beyond the Empire State, the entire Northeast, from Pennsylvania to Maine, had drought conditions in the majority of counties.

The areas affected have more than 30 million people. About two thirds of them live in the New York Metro Area.