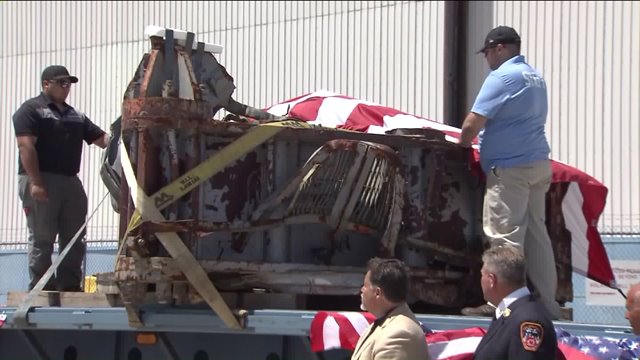 QUEENS -- For nearly 15 years, thousands of historically significant items from the World Trade Center have been stored at a hangar at John F. Kennedy International Airport that used to belong, coincidentally and hauntingly, to the long defunct Tower Air.

That WTC salvage storage facility, which is roughly the size of a city block, is now virtually empty, after the last of its major items were transported in a ceremony on Tuesday.

That ceremony was part closure -- of Hangar 17, the storage facility -- and part commencement, of a new chapter in the education of the public about 9/11.

The ceremony had all of the aspects of a formal law enforcement funeral, from bagpipes to a color guard. The somber pomp and circumstance should come as no surprise, on some level, since something is, after all, being put to rest.

"These pieces contain the DNA of all the lost souls not found that day, including our loved one, Stephen Siller and all of his members from [FDNY] Squad One," said John Hodge, the chief operating officer of the Stephen Siller Tunnel to Towers Foundation.

The pieces to which he referred were three massive items from the Twin Towers, each averaging 19 tons in weight: part of a parking garage structure, an elevator motor and a section of the broadcasting antenna from the North Tower.

Over that time, though, various items were sent to different memorials, museums and other sites around the country, as well as to a handful of other countries worldwide.

"These are the last major ones to come out of the building," said Hodge.

His organization, the Tunnel to Towers Foundation, organized the Hangar 17 final ceremony, as well as the transfer of the last remaining items.

They're earmarked to be put on months-long loan to museums around the country that have the exhibit space to display such large artifacts.

"When you see that," said Frank Siller, Stephen's brother and founder of the Tunnel to Towers Foundation, "you appreciate the size of the buildings," he said, as well as the scale of the loss of life.

The proposed new exhibits in which the large Trade Center items will be displayed will be done in addition to a traveling exhibit the foundation has run for the last three years.

"Most people aren't going to get to New York," said John LaBarbera, a retired FDNY battalion chief who tours the country with the foundation's exhibit of World Trade Center artifacts.

They're displayed in a portable museum space in a semi-trailer that is almost constantly in transit nationwide and in Canada.

"We're bringing the story, with firefighters who were there on 9/11," LaBarbera told PIX11 News.

As the ceremony wound down, the Singing Cop, Daniel Rodriguez, sang God Bless America, as workers shrouded the remnant of the WTC North Tower broadcast antenna in a giant American flag.

Under that tower antenna, PIX11 engineer Steven Jacobson lost his life on 9/11, along with five other broadcast engineers from other local television stations.

After the antenna was covered, it, as well as the parking structure and elevator engine, were driven away on individual flatbed semi trailers, to be readied for their next homes, in 9/11 exhibits.

Their removal sets in motion the end of Hangar 17.

A Port Authority spokesperson said that the northwest area of the JFK grounds is being looked at for redevelopment, and that Hangar 17, which is located in that quadrant, is likely to be demolished as part of that process, now that it's empty of any major items.

It has not yet been determined if any plaque or other historical marker of any kind will be placed there.