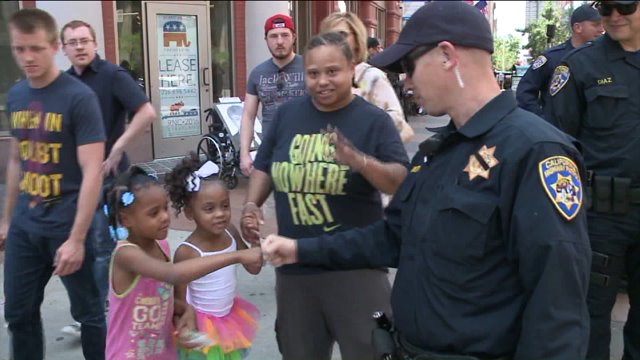 CLEVELAND, Ohio -- Nearly 3,000 law enforcement officers from across the nation have descended upon Cleveland this week creating a convention within a convention.

Approximately 15 states have assisted to help keep the streets of Cleveland secure with the California Highway Patrol sending the most officers at 300.

Sgt. Brandon Shipwash says the first time out of state for the CHP since Katrina has been rewarding.

"It has been really nice," Shipwash said. "Everyone we have come into contact with in Cleveland have been really welcoming. They seem thankful having us in the city helping out, so it's been really really nice."

Indeed it has, thus far.

Only one significant demonstration on streets, which means there has been more time to connect with complete strangers, through a snapshot, a high-five or through a fist pump.

There are several bonds being made involving those who have seen their spirit tested of late.

"It's a brotherhood. We are all brothers here."