How to avoid the Tappan Zee Bridge traffic, find alternatives after crane collapse 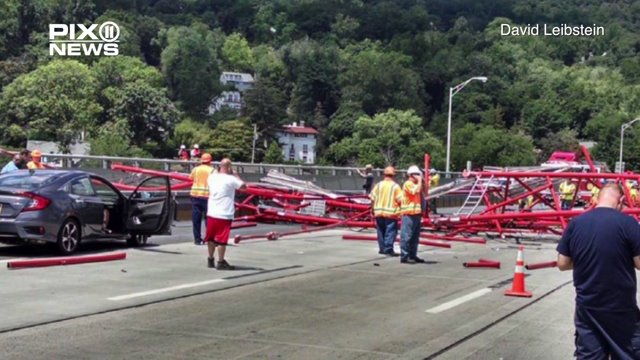 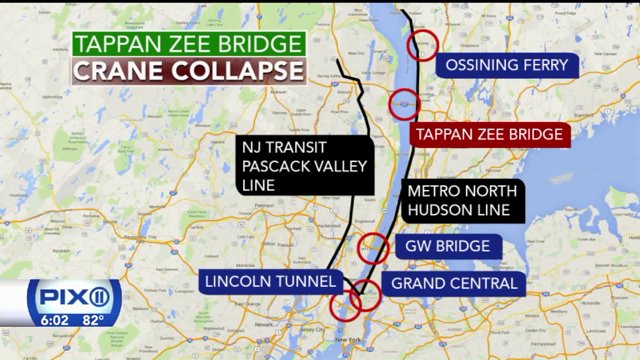 NEW YORK — A collapsed crane on the Tappan Zee Bridge has blocked lanes going both ways and put traffic at a standstill for miles.

A sign in the Bronx warning of a crash after a crane collapsed on the Tappan Zee Bridge is pictured on July 19, 2016. (Dan Mannarino/PIX11 News)

Three northbound lanes were opening a little after 5:15 p.m. On the southbound side, the first lane would open at 7 p.m. and the second at 8 p.m.

Police are still encouraging the more than 135,000 cars that use the bridge daily to find alternative routes to travel between Rockland and Westchester counties as traffic will be affected.

By the morning commute Wednesday, officials expect all lanes to be open except for one damaged southbound lane, Cuomo said.

Here are some ways to get to your destination in the face of what a local police chief has called a "traffic nightmare."

Metro-North Railroad announced a number of changes to their ticketing policies amid the crane collapse.

Commuters can also take the express train to Beacon where they can connect to the Newburgh-Beacon Ferry.

All Hudson Line tickets to Tarrytown will be honored for travel at all stations on the Hudson Line as far as Poughkeepsie.

NJTransit and Metro-North are cross-honoring Hudson Line tickets on the Pascack Valley Line.

If you're trying to cross the Hudson River, the George Washington Bridge can be accessed by the I-95, I-87 or the Saw Mill River Parkway south. Both I-95 and I-87 merge into the Cross Bronx Expressway, which takes drivers onto the bridge. If you're coming from the Henry Hudson Parkway in the Bronx, take Exit 14 to Riverside Drive and follow it into I-95.

On the west side of the Hudson, Route 6 turns into the Palisades Interstate Parkway and runs south into New Jersey.