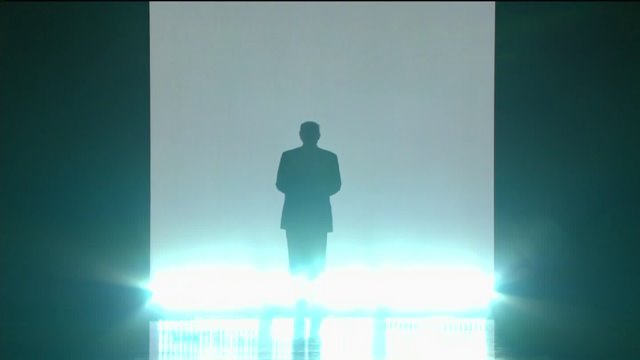 CLEVELAND – When Donald Trump took the stage on the first day of the Republican National Convention in Cleveland Monday, there was no disguising his intentions.

With "We Are The Champions" blaring and the crowd roaring in delight, Trump appeared silhouetted behind a screen, his trademark hairstyle clear against the backdrop. Smoke machines completed the rock star intro as Trump walked to the stage to greet his supporters.

He introduced his wife, Melania Trump, who spoke about her own background as an immigrant from Slovenia and about her husband's character.

Open discord and revolt broke out on the floor of the Republican National Convention Monday as GOP officials crushed an attempt to change party rules, a maneuver that could have embarrassed presumptive nominee Donald Trump.

In a highly unusual show of disunity and anger on the floor of a modern party convention, a group of states tried to force a state-by-state roll call vote on the rules of the convention. The rebellion apparently caught Trump's campaign team by surprise, and his lieutenants were seen frantically whipping votes on the floor to squelch the effort amid scenes of deepening disarray.

The dramatic scenes that unfolded around a normally routine procedure in passing the convention rules effectively turned into the last stand of party forces who had opposed the billionaire in the contentious Republican primary. Those holdouts were not trying to deprive Trump of the nomination -- in the knowledge they didn't have the votes.

But their protest, which highlighted antipathy toward Trump in some parts of the party, may also turn out to have been one of the opening salvos of the Ted Cruz 2020 campaign, as it was driven by several of the Texas senator's most prominent supporters who were keen to make the battlefield more favorable for conservatives in future Republican primaries.

Backers of the effort said they would continue to protest Tuesday, when delegates are expected to formally make Trump their nominee.

"This race isn't over and I'm running to the finish line," Kendal Unruh, a Colorado delegate who is leading the Free the Delegates effort, told reporters on the floor Monday night.

The tumult of the afternoon receded by the evening as delegates heard from a prime-time lineup of speakers who addressed national security issues. Former New York Mayor Rudy Giuliani gave an especially impassioned speech that brought many Republicans in the arena to their feet.

The afternoon furor erupted when Arkansas Rep. Steve Womack, who was serving as convention chair, put the rules for the convention to a voice vote, and amid a chorus of boos and cheers from anti-Trump supporters declared those in favor of the motion had prevailed, while apparently ignoring objections from several state delegations on the cacophonous floor of the convention.

Womack then walked off the stage, amid chants of "roll call, roll call" by protesters, a chorus that was quickly met by loud counter chants of "Trump," "Trump" from the presumptive nominee's supporters.

"I have never seen the floor abandoned like that," said Utah Sen. Mike Lee, a key Cruz supporter as delegates on both sides of the row tried to work out of happen, amid roughly 10 minutes of uncertainty in which a jazz band played on stage, amid scenes of seething anger and confusion on the convention floor.

In one show of anger, Virginia's Ken Cuccinelli threw his credentials on the floor, frustrated that the chair was not allowing a full roll call vote.

At one stage, the Colorado delegation walked out of the convention hall.

When, Womack returned to the stage and ran the voice vote for a second time -- and again declared "In the opinion of the chair the aye's have it" hyphen several delegates did manage to lodge objections.

Womack explained that seven states were required to demonstrate a majority of their delegates wanted a roll call vote. While those backing a vote believed they had achieved that number by filing nine petitions, Womack told the convention that three states had subsequently withdrawn their petitions for a roll call vote, meaning there were not sufficient votes to force such a roll call vote.

Even had there been a roll call vote, the Trump forces would likely have prevailed since the billionaire managed to win a majority of delegates in the GOP primary. The Trump forces were also backed by Republican National Committee officials in a sign of new coordination between the insurgent candidate and the institutional party establishment.

Backers of the rebellion insisted they were not protesting against Trump himself but were trying to overhaul party rules that could change the way the Republican nominee is selected in future elections.

Lee said the fight doesn't demonstrate the party is divided.

"It says there is an honest disagreement about the rules and we want vote on the rules. That's all it says," Lee said. "They are people who are trying to make this a simple debate about people who favor Donald Trump and those who don't... We knew it was going to be close."

Cuccinelli told CNN's Jake Tapper that the rebellion was about "incentivizing states to close their primaries." Such a move could make it more difficult for candidates like Trump that do not have a long conservative pedigree from relying on moderates and independents to boost their GOP primary campaigns.

CNN's delegate expert Mike Shields said that the intervention was not about stopping Trump but "the start of the Ted Cruz 2020 campaign."

But a senior Cruz adviser told CNN's Sara Murray that the Texas senator's team was not pushing for the rebellion.

A closed primary system could help candidates like Cruz, who drew from more hard-line Republicans during his 2016 campaign than did Trump. Cruz frequently argued that Trump drew support from more liberal voters, and his aides frequently predicted that closed states would lead him to victory.

"Closed primaries advantage generally conservatives, and that would be Cruz if he decides to run again," said David Barton, a Christian activist who steered a Cruz super PAC. "It really is beneficial from sheriff races all the way to state senate races. This is a lot of states have been asking for a long time."

The attempted uprising fell far short of the contested convention #NeverTrump forces had hoped at one stage to mount to stop the party nominating Trump, who some opponents see as divisive, insufficiently conservative and likely heading for defeat in November's general election.

Iowa Republican Party Chairman Jeff Kaufmann told CNN that most delegates asking for a roll call vote were raising "legitimate questions" about the rules that had nothing to do with the nominee: "When the gavel falls on this national convention, that doesn't mean the conversations end. In fact, that's when some conversations begin," he said.

Kaufmann said he believes the anti-Trump sentiment here at the convention is a "very small fragment" that has "almost evaporated" and predicted that the prospect of Hillary Clinton as president would expedite the process of coming together.

RNC Communications Director Sean Spicer said that several states dropped out of the demands for a roll call vote once they understood its implications.

"They submitted nine states but as people realized what was being asked of them, three of those states lacked the majority," Spicer told CNN.

Lee on CNN said there were 11 states that had submitted petitions.

Spicer downplayed the idea the aborted rebellion was a sign of discontent in the party.

"Forty-four states were in support. This is a tiny, tiny group of folks that have made noise," he said.

Alex Willette, an RNC committeeman from the Maine delegation, confirmed that Maine was one of the states had submitted signatures and then pulled back. He said delegates said they didn't really understand what they were signing at first. Willette, who did not sign the petition, said some delegates were told that if the rules were voted down, the rules would go back to the 2012 rules, which was not accurate.

After the petitions were filed, Trump aides and RNC staff could be seen fanning across the floor, pulling aside delegates and coordinating their counter-efforts. Top Trump delegate wrangler Rick Gates said he was confident they would be able to repeat their success last week when the Rules Committee met and blocked efforts to unbind the delegates, as well as a similar Cuccinelli-led effort on the 2020 primaries.

"Our goal is to destroy them," Gates said.

As the convention secretary went through the signatures and petitions, the speaker program was interrupted by several musical interludes in order to get more time.

John Fredericks, radio host and Virginia delegate and vice chair of Trump Virginia, whipped his delegates to have his state not sign on to the petition.

RNC leaders were confident they would have won a roll call vote if one was taken.

"We will do one and they will lose big time," New Hampshire Committeeman Steve Duprey said when asked what happens if the signatures to force a vote are valid. "I hope they do so we can whack them one more time."

Members of the Colorado delegation walked out in protest as they called for a roll call vote after the voice votes.

"Overwhelmingly the floor was flooded with people who are upset with the way the rules were handled, said Regina Thomson, Cruz's state director and Colorado delegate and executive director of Free the Delegates. "They want a roll call vote and apparently the leadership just steamrolled right through the fact that the whole place was calling for a roll call vote."

Thomson says they oppose a number of things including open primaries, language in the rules package binding delegates. She wants everyone to be able to come here and vote for the "candidate of their choice."

Jon Stainbrook, an Ohio delegate, was unhappy the roll call vote was blocked.

"This is Republican family discussion -- and our part of the discussion was shut down very abruptly," he said.

"I'm not happy about that, but again, we're not voting for Hillary Clinton. So in the end, we would like to have been given the opportunity to vote for our governor," he said.