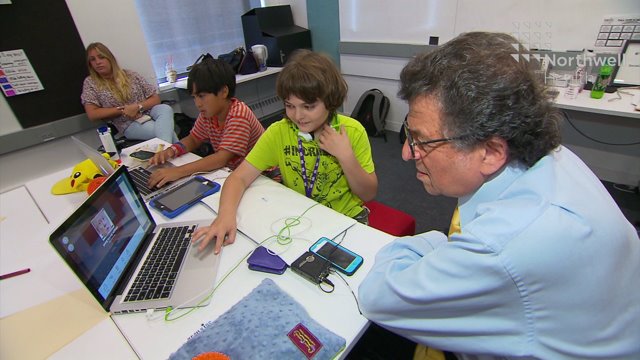 In this week`s It`s a `G` Thing, Mr. G visits a nonprofit offering technology classes to kids who learn differently

Mr. G is always looking for the things that make our city so special.
Tonight he meets several kids who have been diagnosed with Autism Spectrum Disorder, Asperger’s Syndrome or emotional and learning disabilities…
For them, it’s often very difficult to gain employable skills, no matter how smart or talented they are.
But one local organization is changing that—aiming to harness their young minds and develop them in a field growing more every day.

We’re getting a sneak peak into what it takes to make a video game, from scratch and the creativity is just exploding here at Tech Kids Unlimited.

"We get to go crazy with our projects and be all silly about it,” Alice, a participant, smiled.

“We’re basically learning how to design easy games that have already been made so we can learn to design our own games in the future,” Joseph, another participant, explained.

A future in technology, these children now believe is possible.

“What company would you like to work for?" I asked Joseph. "Probably Nintendo because that’s my favorite company so far," he replied.

Confidence and optimism cultivated by the non-profit, which serves those who learn differently and often are diagnosed with Autism Spectrum Disorder, Asperger's Syndrome or emotional and learning disabilities.

“These kids are smart, these kids are passionate and they love technology," Beth Rosenberg said. "They just don’t have the support and nurturing in the classroom that they need to succeed.”

That reality hits very close to home for Beth Rosenberg, who first started this organization for her son, Jack.

“At two years old he didn’t really talk and then my family encouraged me to take him to early intervention,” she remembered. "But he always wanted to be by the screen, he was always on the computer."

These classes have helped Jack and dozens of others since 2009.

“What has this program done for you?" I asked Jack Rosenberg. "It’s really helped me evolve in all the friendships I’ve made,” he said.

"I like it because number one, it’s fun and number two, it gets me out of the house,” Harry said

For some, it’s about changing how they view themselves, after being told for years they couldn’t do certain things.

“Whenever I hear that, I think they’re wrong, I don’t like to give up,” Jack said.

“If I have disabilities then who cares really because you are who you are and that’s the only thing you can control,” Jason, a long-time participant, said.

A variety of software programs are taught through week-long camps and workshops.

"It gives the kids the interest and the know-how to take those programs and continue at home," Rosenberg explained.

For Jack, that interest has turned to many passions.

"Video editing because I just love to take different clips and put them together,' Jack said.

His goal isn't necessarily to make movies though, but to be in them.

“Tell me who you like imitating," I said. "Last year for Halloween I was Donald Trump, I also think I do a really good Bill Clinton and Larry David.”

As they make their way into the real world, the kids hope these tech skills will get them a real job.

“What would you like to say to those people who were judging you in a certain way?"I asked Jack. "Look at me now!” he smirked.