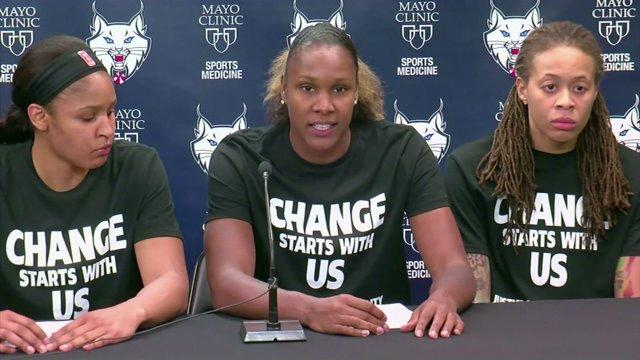 Four Minnesota Lynx players stood solemnly at a press conference, showing the Black Lives Matter T-shirts their team was about to wear on the court.

It wasn't long before the statement, according to the Minneapolis Star Tribune, made four off-duty officers walk off the job.

Members of the reigning WNBA champions wore the black-and-white shirts during warm-ups before a game Saturday against the Dallas Wings.

"Change starts with us. Justice & accountability," the front of the shirts said. On the back, the T-shirts showed the names of Alton Sterling and Philando Castile, two African-American men killed by police last week. It also displayed the Dallas Police Department emblem and the phrase, "Black Lives Matter."

"We as a nation can decide to stand up for what is right, no matter your race, background or social status," forward Maya Moore told reporters. "It is time that we take a deep look at our ability to be compassionate and empathetic to those suffering from the problems that are deep within our society. Again, this is a human issue, and we need to speak out for change together."

The message reportedly didn't sit well with Minneapolis officers who were working off-duty, providing security at the event.

Four of them walked off the job that night and removed themselves from a list of officers working future games, according to the Star Tribune, which cited a local police union leader.

Lt. Bob Kroll, president of the Police Officers Federation of Minneapolis, did not immediately respond to a request from CNN for comment.

In an interview with the Star Tribune, he praised the officers' move, adding that others may follow suit.

"Rushing to judgment before the facts are in is unwarranted and reckless," he said, according to the newspaper.

In a statement Tuesday, Minneapolis police Chief Janeé Harteau said she understands how the off-duty officers felt but does not condone their actions.

"Although these officers were working on behalf of the Lynx, when wearing a Minneapolis Police uniform I expect all officers to adhere to our core values and to honor their oath of office," she said.

"Walking off the job and defaulting on their contractual obligation to provide a service to the Lynx does not conform to the expectations held by the public for the uniform these officers wear."

"While I do not condone the actions of the officers, I realize how every member of law enforcement throughout this country, including myself, is feeling right now," she said. "Everyone is hurting and we all need to find a way to come together. I am proud of our profession and the service our officers provide on a daily basis."

'Scared for my brothers and sisters'

The players told reporters that their shirts aimed to honor those who lost their lives in the past week, and to call for an end to racial profiling and senseless violence, CNN affiliate WCCO-TV in Minneapolis reported.

Moore praised the Dallas police for its training and other efforts to lower officer-involved shootings, according to WCCO.

"Racism and unjust phobic fear of black males and disregard of black females is very real," Lynx player Rebekkah Brunson said. "When we look at the facts, it's hard to deny that there's a real problem in our society. I'm scared for my brothers and sisters, my nieces and nephews, my future son or daughter."

In a statement Tuesday, the team said it had been made aware of the off-duty officers' concerns.

"While our players' message mourned the loss of life due to last week's shootings, we respect the right of those individual officers to express their own beliefs in their own way," the Lynx said. "At no time was the safety of our game in question as Target Center staffs extra personnel for each and every game. The Lynx and the entire WNBA have been saddened by the recent shootings in Dallas, Baton Rouge, and St. Paul. We continue to urge a constructive discussion about the issues raised by these tragedies."

It isn't the first time sports stars have added their voices to a chorus of protesters speaking out over police violence.

In 2014, after a New York grand jury decided not to indict an officer in the death of Eric Garner, athletes across the United States wore T-shirts emblazoned with Garner's last words, "I can't breathe."

Earlier that year, five players from the St. Louis Rams walked onto the football field with their palms in the air, demonstrating the "hands up, don't shoot" gesture that protesters used in demonstrations over the shooting of Michael Brown in Ferguson, Missouri.