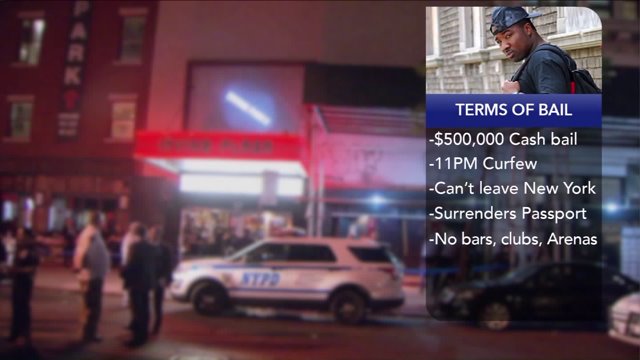 NEW YORK — Rapper Troy Ave was released on bail Monday following his arrested in connection to the deadly shooting at Irving Plaza before T.I.'s performance in May.

Troy Ave, whose real name is Roland Collins, posted bail at $500,000. Collins is charged with attempted murder in the May 25 shooting. He will also be required to follow a list of conditions that include:

The Brooklyn rapper was caught on video firing a gun before headliner T.I. was set to perform. Collins' bodyguard, Ronald McPhatter, was shot and killed. Three others were injured.

Collins also suffered a gunshot wound to the leg.

Prosecutors said Monday Collins fired a gun and removed it from the crime scene. They said Collins and his entourage also had three loaded handguns in the car shortly after McPhatter was fatally shot.

Collins' DNA was found on each gun, including the one used to kill McPhatter, according to prosecutors.

Collins has proclaimed his innocence in a mixtape he released from jail in June. In the "Free Troy Ave Mixtape," he explained his actions were in self-defense.

A second arrest has not been made.