It’s a ‘G’ Thing: Dr. Peter Silver is devoted to saving lives and serving his community 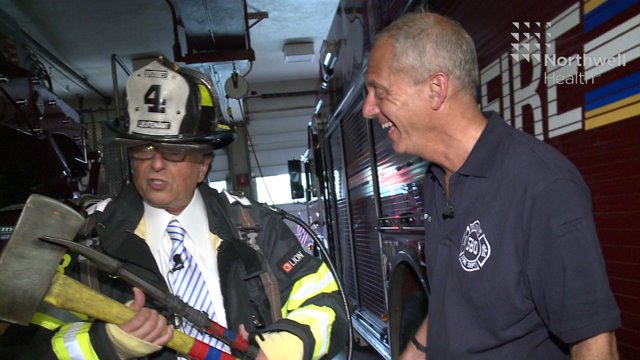 in this week`s It`s a "G" Thing, Mr. G meets a man who works at Cohen Children`s Medical Center and Syosset Fire Department

“What goes through your mind early in the morning when you do your first lap?" I asked Dr. Peter Silver. "A sense of pride,” he said.

Dr. Peter Silver feels at home when he walks the halls of Cohen Children’s Medical Center.

“Also a sense of concern just looking into each room,” Dr. Silver said.

He cares for the sickest kids as Chief of the Pediatric Intensive Care Unit.

“As scary as that may seem to some, there’s no more gratifying area to work,” he smiled.

He’s has helped mold, develop and progress the PICU over his 26-year career. Right now, he’s most intrigued by 'telemedicine' and ‘Just in Time’ Simulation.

“A mannequin and monitors that really mimic the condition of the child in that bed," he explained. "We will enact a scenario that that child is at risk for that day so God forbid it happens, we’ve already practiced it once.”

He’s always on the go, working more than 65 hours a week.

“I have an extremely supportive family,: Dr. Silver said. "I’ve been married to my wife, Nancy, for 30 years and have Harry and Emily, my two grown children.”

When Dr. Silver’s not at home or the hospital, he’s giving back in another way.

“Welcome to the Syosset Volunteer Fire Department," he said.

For nearly three decades, he’s responded to all types of emergencies.

“The toughest fire I’ve ever fought was a truck fire that stopped traffic and we had no water supply because there were no fire hydrants,' he remembered.

Putting on that gear was a childhood dream, one his wife helped him fulfill.

“When I was done with my pediatrics residency I  started to spend some more time at home," Dr. Silver explained. "Then there all of a sudden, I was helping my wife in the garden, and you stay out of my wife’s garden! She said you know, I think you need to find a hobby.”

He served as Chief for eight years, and highly cherishes this brotherhood. But his favorite part of the job?

"Going into people’s houses, to take care of them on what may be the worst day of their life,” he said.

He says the community can always use more help. So, naturally, I volunteered!

While I may be helpless, Peter Silver will never slow down, doing what he loves for as long as he can.

“There will be time to rest later on but right now there’s just too much to do and there are people we can help,” he smiled.