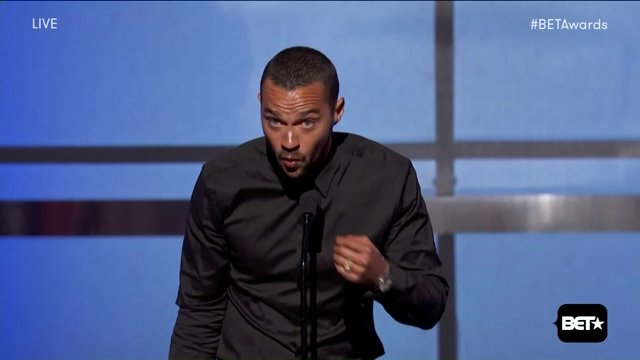 Jesse Williams is the subject of dueling online petitions following the actor's fiery speech after receiving a humanitarian honor at the BET Awards last month.

One petition calls for the "Grey's Anatomy" star to be fired over the June 26 speech in which he criticized police in America, saying, "We know that police somehow manage to de-escalate, disarm and not kill white people every day."

This petition has received over 11,500 signatures and the creator of the petition calls Williams' speech a "racist, hate speech against law enforcement and white people."

"If this was a white person making the same speech about an African American, they would have been fired and globally chastised, as they should be, but there has been no consequences to Williams' actions," the petition reads.

Another petition filed in response supports Williams, calling him "a brave leader."

"Jesse's speech is NOT a hate speech," the petition reads. "It is a beautiful demonstration and celebration of his 1st amendment right of free speech."

The petition in support of Williams has received more than 7,500 signatures.

"Grey's Anatomy" creator and producer Shonda Rhimes has given her own thoughts on Twitter , writing "Um, people? Boo don't need a petition."

Williams has played Dr. Jackson Avery on the ABC drama for seven seasons.