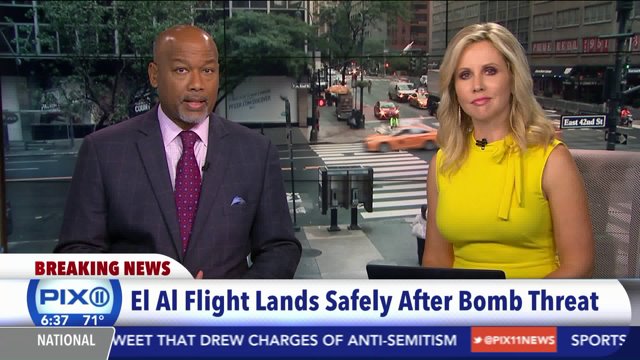 El Al President David Maimon said Flight 002 from John F. Kennedy airport touched down midday after an anonymous tip was received regarding a potential bomb threat onboard. Following the tip, France and Switzerland deployed military jets over their airspaces as escorts for the Boeing 747 plane flying toward Israel.

At Ben-Gurion Airport, worried relatives awaited the passengers in the arrival hall. The passengers themselves said they were unaware of the drama until landing.

The Swiss air force said in a statement that it deployed jets around 8:30 a.m. on a so-called "hot mission," that accompanied the flight. Vladi Barrosa, a spokesman for the Swiss government-run air navigation service Skyguide, said the plane left Swiss airspace safely into Austrian airspace.

The incident caused concern a mong locals in German-speaking Switzerland after two sonic booms echoed after two Swiss F/A-18 aircraft were deployed for the escort. Barrosa, working in the Zurich area, said he too heard the blasts: "I thought my windows were about to burst."

He said French military jets had also escorted the flight prior to its entry into Swiss airspace, but he did not have further details. French officials had no immediate comment.