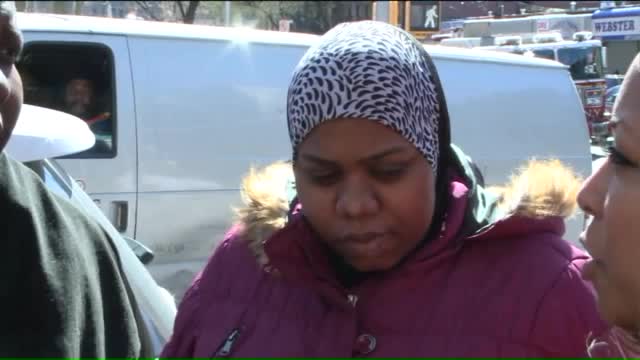 CLAREMONT, the Bronx — A Bronx mother has been indicted in connection with the deaths of her two young children who were left alone in their apartment when a fire erupted, sparked by incense.

Haya Konte, 27, was indicted Tuesday on two counts of criminally negligent homicide and two counts of endangering the welfare of a child when was arraigned.

According to the investigation, on the night of April 13, Konte left her daughters Jainabu Jabbie, 2, and Adama Jabbie, 18 months, alone in their apartment at 1368 Webster Ave. in the Butler Houses while she did laundry across the street.

Incense was left burning in two places in the home, igniting a fire that swept through the apartment and killed the sisters.

Surveillance video from the laundry store shows the expectant mother doing the laundry then running outside when she sees flames and smoke coming from inside her building.

She collapsed on the sidewalk when she realized her two children were trapped inside the burning apartment.

The girls were pulled out alive, but later died at a hospital.

Family members said the father of the girls was praying in the mosque at the time the fire broke out and the girls' mother thought other people were in the crowded apartment when she went across the street to do laundry.

The FDNY told PIX11 News there were no working smoke detectors in the third-floor apartment where the girls lived.

Konte was released on her own recognizance after surrendering her passport and is due back in court on Sept. 7.