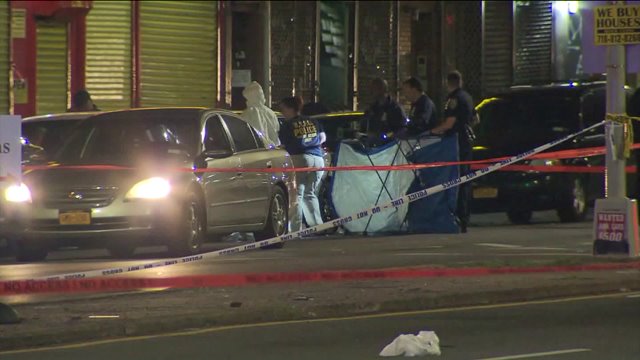 It was about 12 a.m. when the off-duty officer, who was driving his Nissan Altima east on Atlantic Avenue, engaged in an argument with another driver in Cypress Hills.

Soon after, both men stopped their vehicles at a red light on Bradford Street.

According to the NYPD, that's when the driver of a 2016 Kia EX exited his vehicle -- with a 5-month-old inside -- and punched the officer's head through an open driver's side window.

Law enforcement sources said the beating continued despite the officer identifying himself as a member of the NYPD. He then pulled out his gun and shot the driver at least three times, mortally wounding the 37-year-old.

The driver of the Kia, who was not armed, died at the scene. He's been identified by family as Delrawn Small. The officer was taken to a hospital and treated for injuries to his head.

"It hurts more when it is by the hands of someone that’s supposed to be protecting us and now all I’m seeing if them protecting themselves," Small's brother, Victor, said on behalf of the deceased's family.

The deceased's brother said it's unlike Small to have punched someone.

An attorney for the family said the officer has a "duty to retreat" and that whatever happened between the men, "it does not justify murder."

Pervasive throughout the news conference was a palpable suspicion of the investigators looking at what happened in that Brooklyn street in the middle of the night, just ahead of the Fourth of July holiday.

The encounter is being reviewed by the Force Investigation Division. Councilman Charles Barron said the Attorney General's office has been called to investigate, as well.

Barron called the fatal encounter "outrageous" and said the off-duty officer had an obligation to drive away.

"We can expect (NYPD Commissioner William) Bratton's gonna talk about, 'Oh, we're gonna look at the re-training; we're gonna look at training programs.' It’s beyond that. A part of the problem why officers continue to act with impunity is because they have an unspoken immunity," Councilwoman Inez Barron said.

In a statement, the attorney general's office said:

"Members of the Attorney General's Special Investigations and Prosecutions Unit are in contact with the NYPD, the victim's family, and community leaders. SIPU has a search warrant for the officer's car and is actively reviewing the case."