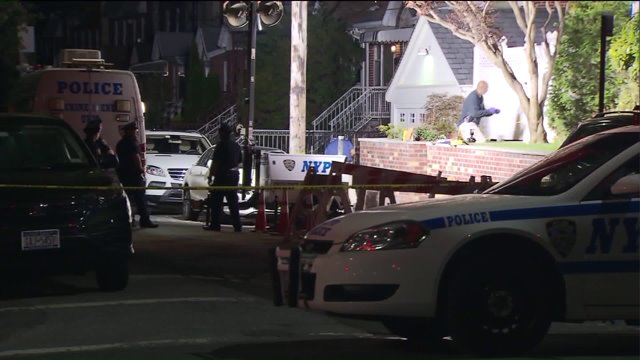 DYKER HEIGHTS, Brooklyn — The shooting death of Louis Barbati, the co-owner of famed Brooklyn pizzeria L&B Spumoni Gardens, appears to be the result of a botched robbery, according to the authorities.

Police said 61-year-old Barbati, who partly owned the iconic L&B Spumoni Gardens in Gravesend, was coming home from work when he was confronted by a hooded gunman just after 7 p.m. Thursday at his home on 12th Avenue near 76th Street.

Clutching a bread bag containing $10,000, Barbati was shot multiple times in his back, arms and legs, police sources tell PIX11.

Chief of Detectives Robert Boyce said Friday afternoon that the killer knew Barbati was carrying a significant amount of money. The killer did not take any cash and remains at large.

His wife, who was inside with their children, reportedly told police she thought the commotion she heard was fireworks.

Moments later she realized they were actually gunshots as she heard Barbati screaming her name before he collapsed and died.

Police say they have no further description of the shooter at this time.

Barbati was well-known throughout the city for co-owning the pizzeria started by his grandfather in 1939. Famous for its delicious Sicilian pizza slices, L&B Spumoni Gardens was even featured on the Travel Channel's "Man Vs. Food."

The restaurant, run by Barbati's family for four generations, also gained notoriety in 2012 when a mob turncoat claimed the restaurant was at the center of a gangland dispute over its red sauce recipe.

At a federal trial of a reputed Colombo organized crime family associate, a cooperator testified that the defendant — the husband of a member of the L&B family — flew into a rage when he became suspicious that a Staten Island pizzeria stole a red sauce recipe.

The witness testified that as payback, the Colombos tried to extort $75,000 from the owner of the Staten Island eatery. He said the owner ended up only paying $4,000.

PIX11's Myles Miller and the Associated Press contributed to this report.