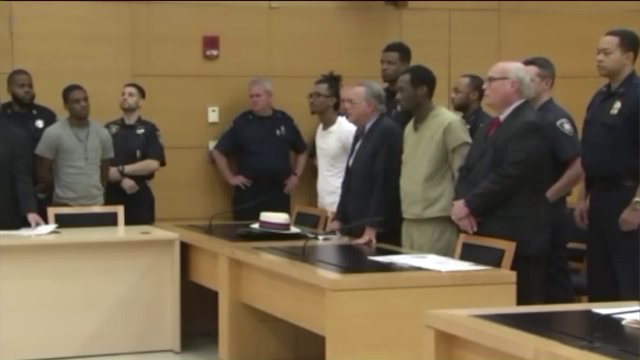 CROWN HEIGHTS, Brooklyn — Three people have been arrested and charged in connection to the fatal shooting of Carey Gabay, a former aide to Gov. Andrew Cuomo who was killed last year during a gang shoot out while walking at the J’ouvert Festival in Crown Heights, police and the DA announced Wednesday.

“These defendants are charged with creating a killing field in a crowd of innocent people, showing depraved indifference to human life and causing the death of Carey Gabay,” Thompson stated in a news release.

Gabay, a first deputy counsel for the Empire State Development Corporation and former assistant counsel to Cuomo, was walking with his brother and friends on Labor Day when the group is believed to have been caught in the crossfire of multiple gangs at 1680 Bedford Ave., outside the Ebbets Field Houses.

Members of the Folk Nation street gang, of which Alleyne is an alleged member, controlled the building’s patio and had engaged in a yearslong battle with the 8-Trey faction of the Crips, among other gangs.

Despite the presence of hundreds of people, multiple armed gang members were in the area that night, ready to shoot rivals, according to the police investigation.

As members of the 8-Trey gang allegedly approached “enemy territory,” a gun battle between them, Folk Nation, and their affiliates broke out.

Gabay’s group was caught in the firefight, of which some two to three dozens shots were fired from at least eight firearms, and the former aide suffered a bullet to the head.

He was rushed to a hospital, where he died nine days later.

Alleyne; Crawford, an alleged Hoodstarz member, affiliated with Folk Nation; and Luncheon, allegedly with 8-Trey; have been indicted under the theory of mutual combat, meaning they had entered a “defacto agreement” to engage in a gun battle that night, and are therefore all equally responsible for Gabay’s death regardless of whose gun fired the fatal bullet, the DA said.

They have been variously charged in a 16-count indictment with second-degree murder, second-degree criminal possession of a weapon and first-degree reckless endangerment.

All three were arraigned Wednesday and face a maximum sentence of 25 years to life in prison if convicted of the most serious charge.

In addition, Stanley Elianor, 25, of Brownsville, Brooklyn, was arraigned in October 2015 on charges of second-, third- and fourth-degree criminal possession of a weapon.

Elianor faces up to 15 years.

“This indictment shows the importance of our efforts to put an end to gang-related gun violence that places innocent lives in the crossfire. We are determined to get justice for Carey and his family and to hold accountable everyone who was involved in the shootout that took his life,” the DA said Wednesday.

Alleyne was first taken into custody on May 26, and Elianor, also allegedly with Folk Nation, was arrested on Sept. 18, 2015.

Although Elianor was not initially connected to the Gabay shooting, DNA evidence later linked him to a loaded Mac-10 machine gun recovered at the scene, according to the investigation.

In the months after the shooting, the reward for information leading to the arrest of those responsible grew to $22,500 and surveillance images of three males and a female wanted for questioning were released.

It was not known if a tip led to the arrest of any of the men.

Gabay, a 43-year-old expectant father, was described Wednesday as a Harvard-educated man who was committed to public service and improving the lives of others.

“Carey Gabay was a dedicated public servant whose life was cut short due to reckless gun violence,” Cuomo said. “Today's indictments are an important milestone in the quest for justice, and I hope that they bring solace to Carey's family and loved ones."

The annual West Indian Day Parade and J’ouvert celebration, which precedes the parade and goes from about 2 to 6 a.m., has previously been criticized for violence that often takes place during the celebration of Caribbean culture, history and art.