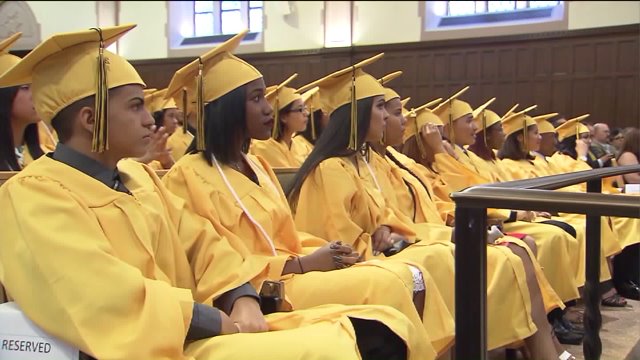 TREMONT, The Bronx —  The 64 graduates of the Theater Arts Production High School class of 2016 have so much to be proud of.

This 8-year-old New York City public high school in the Tremont section of the Bronx is in a neighborhood where the graduation rate is 60 percent. Yet Tapco, as it is called, has a 77 percent graduation rate with all of this year's graduates going on to college.

"The key to our success is the collective work of our entire school," principal Ron Link said. "It's the parents, teachers, staff members, all the way down to the cafeteria workers and custodians."

Tapco is a school for the performing arts where half of the students audition and the other half show an interest in behind the scene production. But to the students it's all about community.

"I like the fact that we all get along. It's like family," Angela Reyes, a graduate, told PIX11 News.

"It's been a very welcoming experience for me," salutatorian Allen Deleon told PIX11 News. "I just love the people and environment. It's like my second home."

Due to that sense of community and achievement, these graduates were offered $5.5 million in grants and scholarships to an impressive array of colleges and universities, making the families and the faculty exceedingly proud.