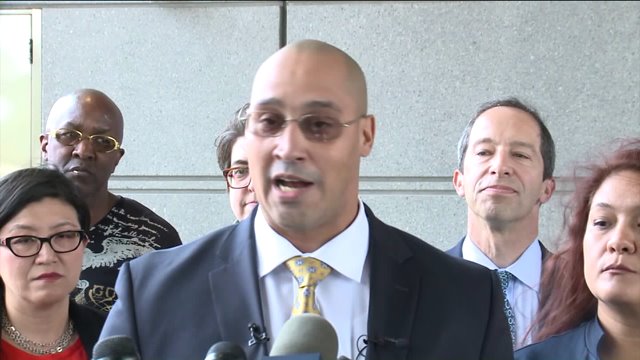 THE BRONX -- After spending 20 years in jail for a crime he says he didn't commit, a Bronx man took an unusual move in court today.

It was a stunning day in court as Richard Rosario asked the judge for a stay of dismissal, keeping the murder indictment against him.

An open homicide case still hangs over Rosario's head. He says it's worth it because he wants to keep the case alive and continue the investigation, to prove his innocence.

"We want the court to stay the dismissal," said defense attorney Glenn Garber, of the Exoneration Initiative. Garber spoke before a packed courtroom.

The 40-year-old Rosario was freed from prison in March. His sentence was vacated after spending 20 years in jail for a crime he says he didn't commit — the 1996 shooting death of 17-year-old George Collazo on a Bronx street.

Friday was supposed to be the formal dismissal of his conviction. Outside court, he explained his stunning request.

Being free is not enough — he wants his name cleared.

"I took this unusual step of stopping them from dismissing their indictment until the complete truth is out there, everyone knows I'm innocent," said Rosario.

But the Collazo family says they aren't buying it.

"He goes around saying he's innocent; he's lying to you and to the public," said the victim's father, also named George Collazo, as he spoke before a throng of reporters.

From the very beginning, Rosario has maintained his innocence.

He claims he was in Florida when the murder was committed. Thirteen alibi witnesses backed him up. His court-appointed attorney only reached out to two of the 13 alibis. Police reportedly did not check out any of the alibis.

Rosario was convicted when two eyewitnesses picked him out of a lineup. He was sentenced to 25 years to life.

Over the years, he has tried to get the sentence vacated. Several years ago, attorneys from the Exoneration Initiative looked into his case and began to represent him.

The case was renewed when new Bronx District Attorney Darcel Clark came into office in January.

The prosecution conceded Rosario was denied his right to effective counsel.

Now, Rosario wants access to a file that allegedly went missing until recently. He claims the DA's office has reneged on agreeing to give him access.

"All I'm asking for is transparency," Rosario said.

In a news release from his office: "According to reports, people in poverty account for more than 80 percent of individuals prosecuted. These criminal defendants plead guilty approximately 90 percent of the time. In many cases, overworked lawyers entered pleas for defendants without spending substantial time on these cases, interviewing witnesses, or filing pre-trial motions."

Judge Robert E. Torres asked both sides for written arguments on the stay by Aug. 30. The prosecution is objecting to the stay, arguing they are already committed to fully investigating the case.