Jaguar shot and killed after being in Olympic torch ceremony 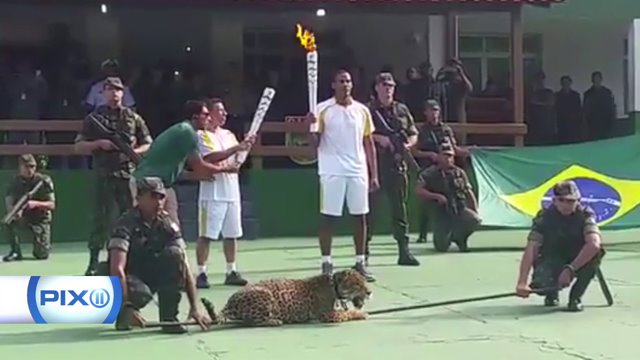 A Jaguar used in a recent Olympic torch ceremony in Brazil was shot dead by a soldier after the animal escaped from its handlers, officials said.

Animal rights groups are now in an uproar because of the killing and an investigation has been launched.

The jaguar, which the International Union for Conservation of Nature said is an endangered species, is already extinct in El Salvador and Uruguay.

The army released a statement saying the animal, named Juma, had been kept at a zoo attached to a military training center where the torch ceremony was held. A soldier fired a single pistol shot when Juma, despite being tranquilized, approached the soldier.

Animal rights groups like PETA and the Animal Freedom Union questioned why Juma was used in the first place, when it was deemed illegal according to the Amazon State's Institute for Environmental protection.

The local organizing committee Rio 2016 said in a statement: "We made a mistake in permitting the Olympic torch, a symbol of peace and unity, to be exhibited alongside a chained wild animal. This image goes against our beliefs and values."