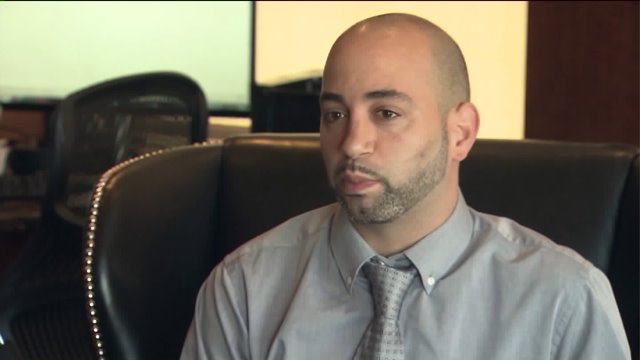 Louis Falcone said on June 19, 2015, the officers from the 122nd precinct brutally beat him while calling him homophobic slurs while he was at his Midland Beach home. Falcone said he's suffered severe emotional and physical trauma.

"Gay, straight, black just people as a whole why should we be abused by protectors of our society?" Falcone said.

The incident was recorded by a neighbor who lives across the street.

The officers, named in the suit as Robert Ramirez, Erik Miller, Phillip Alfano and Joseph Ranola, responded to Falcone's house around 5 a.m. that morning after a noise complaint.

Falcone acknowledged his brother was there and the two had gotten into a fight, but by the time cops arrived, his brother had left.

He said the officers dragged him outside and beat and kicked him.

Falcone, who is openly gay, alleged that one officer yelled at the other officers as he bled "don't get it on you, the f----- probably has AIDS!"

He claimed the cops also called him other gay slurs while roughing him up.

"They just ripped me out I'm still dumbfounded by it."

Falcone spoke to PIX11 News at the office of his attorney, Eric Subin.

“It’s particularly egregious because of their motivation. They came to this man’s house because of a noise complaint and then dragged him outside and beat him senseless and unconscious, requiring multiple surgeries. All because they didn’t like who he is or how he orients himself sexually,” Subin said.

Police have said his injuries were from the fight with the brother and he got belligerent when they tried to take him into custody and spat at them.

“The lawsuit is seeking 25 million dollars in damages both compensatory and punitive damages. We’re seeking punitive damages against the individual officers. The individual officers are accountable if not more accountable than the city and police department as a whole. Bad apples ruin an entire bushel. It can’t just be the city continuing to pick up the tab for rogue violent officers perpetrating crimes against law-abiding citizens,” Subin said.

The video, recorded by Falcone’s neighbor, shows the cops dragging him out the front door and slamming him to the ground. There is faint audio of him screaming. The alleged homophobic slurs are not heard on tape but eyewitnesses, including the neighbor who recorded the incident say they heard it. Falcone says he has suffered lasting emotional and physical trauma

“Mentally just leaving my house I'm afraid right now it’s Gay Pride Month. I'm afraid to go to the Pride parade because I'm afraid I might be targeted by police. I’m in constant fear and that’s the hardest part. I can fix an injury, I don’t know how long I’ll recoup from the fear,” said Falcone.

Falcone said they broke his nose in the incident. He had to have surgery to repair it. He’s also had severe back pain, leg pain and nerve issues, requiring pain management therapy. He works as a cook and at times, it has been difficult to go to work.

PIX11 News reached out to the city's law department for a comment about the lawsuit, we have yet to hear back. The four officers are still on the job.

Falcone said he just wants to ask the officers, “Why, why , why did you do this to me?”