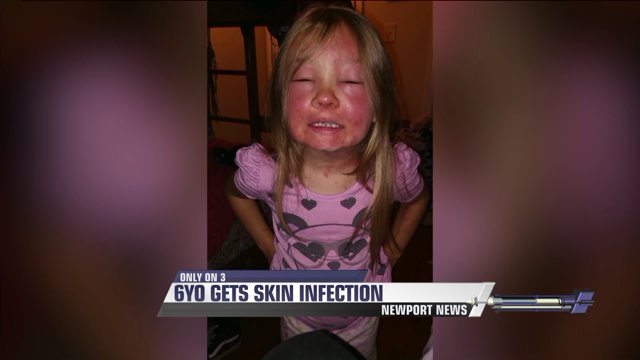 NEWPORT NEWS, Va. — A Virginia mom says her child has a severe case of impetigo after swimming at Huntington Beach on Saturday.

Nicole Sullivan says her daughter, 6-year-old Bella, had a scratch on her face when she went swimming.

Sullivan says she progressively started to develop some redness and swelling. By Tuesday, it turned into a painful, itchy infection.

"I thought maybe it was just poison ivy so I put some caladryl lotion on it and some Benadryl," she said. "Tuesday morning she woke up and both eyes were completely closed shut and she was completely swollen, her face, her neck, her arms also."

When she took her to the doctor, Sullivan says Bella was diagnosed with impetigo due to the bacteria from the water getting inside of her cut.

According to the Mayo Clinic, impetigo is common in infants and children and usually appears as red sores on the face, especially around the child's mouth.

Environmental Health Manager for the Peninsula District Gary Hagy says the water levels tested below the standard back on June 9, so there was no advisory when Bella went swimming.

There was a swimming advisory due to higher than acceptable levels of bacteria in the water on June 8, but it was lifted the next day.

Hagy says the bacteria can include human waste.

Unless there is an advisory, they usually test the water once a week on Tuesdays. He says surface water can fluctuate often. It's never constant and there is always going to be a risk.

He recommends to not submerse an open cut in the water or go into the water after a heavy rainfall for at least 24 to 48 hours.

There have been three swimming advisories since May 25.

Hagy says they have been working with city officials, including public works, to determine the cause of the high bacteria levels but they have not found a reason so far.