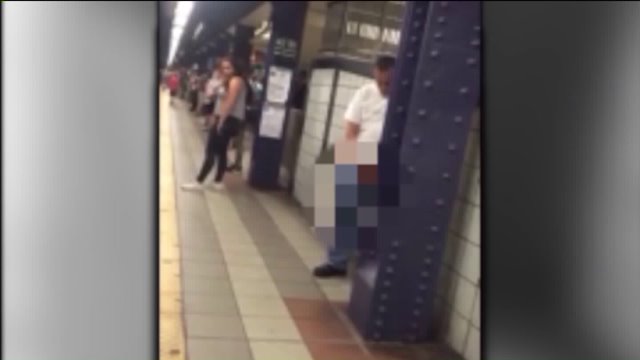 Update: A man has been arrested in connection to the Wednesday incident. Click here to read the updated story.

Original post: MIDTOWN, Manhattan — A Manhattan woman is taking action after a man exposed himself, masturbated and followed her in the subway.

Natasha Huang-Smith was heading home from yoga at about 3 p.m. Wednesday when she noticed a man acting strangely near her on a subway platform near the Port Authority.

When she realized what he was doing, she started to record him with her cell phone.

"He looked directly at me and I had the cell up as if I was texting or listening to music," Huang-Smith said.

Even though Huang-Smith was terrified, she caught him on camera. Evidence she gave to police. According to police, this is not an isolated incident. But many times, it goes unreported or there is no proof.

"I hope that in sharing this with news and police, I hope they find people like this, they get help for people this, or they just make people more aware of their surroundings," she said.

The man followed Huang-Smith onto the subway train and even sat across from her.

She got off at Columbus Circle and ran to first police officer she saw. She spent the afternoon and early evening with the NYPD.

According to police, this is an active and open investigation.

Natasha Huang-Smith said she needs to go back to see if she can identify the man in a book of people who have done similar things. If he isn't in there, she said, police will get a new entry.

Huang-Smith said she hopes her evidence will get this guy off the street and raise awareness of this type of crime.