A day in the life of NYPD’s K-9 crimefighters 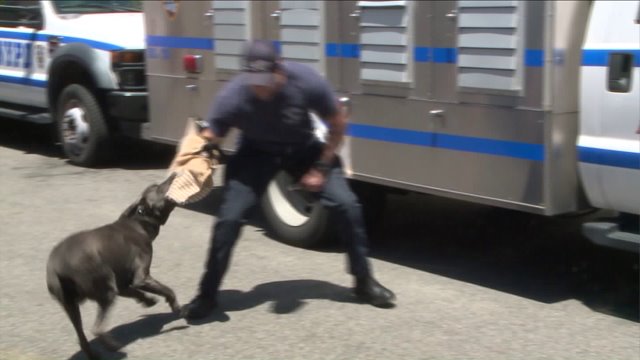 PIX11 News was given an exclusive, rare look at the daily lives of these four-legged crime fighters.

Sgt. Randy Brenner and his K-9 partner Shawnie, a 3-year-old German shepherd, scour the subways to help keep 6 million riders safe. How safe would Brenner say they are? “Very safe.”

With all the technology available to officers, believe it or not, nothing beats a nose. Shawnie was able to detect explosive material we planted in a backpack in just seconds.

“If there is something they can find it and we deploy our resources we know it’s there and will evacuate and deploy,” Brenner said.

Don't let the Friday rain ruin your day. Check out this #GoPro video from our K9 Zane https://t.co/PhBsGJA1AG #ZaneCam

These special canines patrols go on throughout the five boroughs, at high-profile locations and so-called sensitive areas. Every parade, sporting event, or major city event, they're working.

The memory of Officer Shawn Mahoney, who died from 9/11 -related cancer, lives on through his partner's canine, Shawnie. (Photo: NYPD)

These dogs can even track a subject through crowded city streets and train stations.

And it’s clear the connection between officer and canine is like no other. As a way to never forget our fallen heroes, many of the NYPD canines are named for an officer who was killed in the line of duty.

For example, Shawnie is named after Officer Shawn Mahoney from the 109th precinct. Mahoney was Brenner’s partner for 7 years and recently died from 9/11-related cancer.

“Not a day goes by I don’t think of him,” Brenner said. “He’s on my brain. I'm at work and his spirit lives on through his canine.”