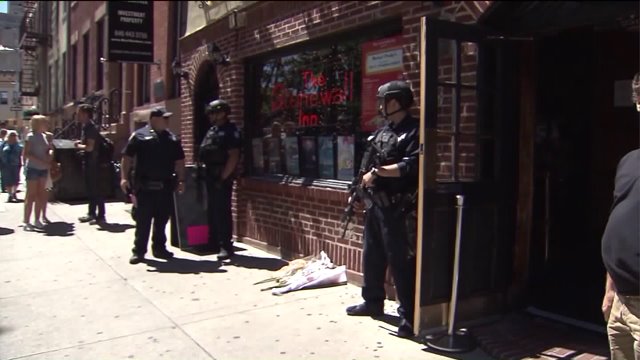 New Yorkers are gathering at historic bar The Stonewall Inn to grieve the deaths of at least 50 people in the shootings at an Orlando gay nightclub. (Myles Miller/PIX11 News)

NEW YORK — New Yorkers are gathering in Manhattan at a historic bar to grieve the deaths of at least 50 people in a Florida gay nightclub.

People began assembling at the Stonewall Inn in Greenwich Village Sunday after the worst mass shooting in U.S. history.

The Manhattan bar became a national symbol of gay rights after a 1969 police raid led to violent street riots.

Gunman Omar Mateen was shot to death by police at the Pulse nightclub in Orlando, Florida, after holding hostages for hours.

Activist Andy Humm, host of the "Gay USA" TV show, says Stonewall is "where we go when things like this happen." He says Sunday's gathering is spontaneous for individuals feeling a need to be together.