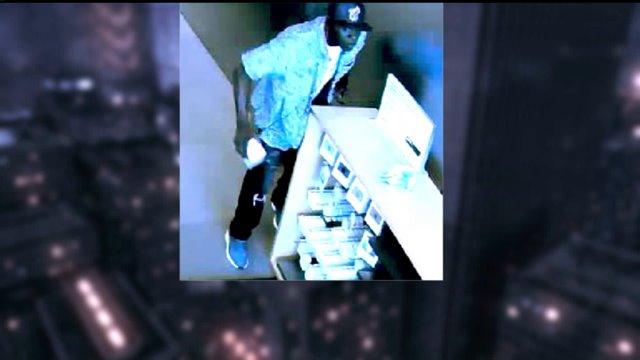 SOHO, Manhattan — It took a "genius" to pull off this heist: two thieves put on Apple store employee t-shirts and headed past the Genius Bar to the repair room, grabbed what they could and walked out with more than $16,000 worth of iPhones, police said.

Police released two pictures of the thieves, one of whom appears to be caught in the act with an iPhone in his hands.

This brazen heist happened at the Apple store in SoHo on Prince Street. It was crowded with customers when they walked up the flight of stairs in their green Earth Day Apple t-shirts to the second floor repair room at 5:30 p.m. on June 1, according to police. They hid 19 iPhone 6 Pluses under their shirts, worth close to $16,000, and walked right out.

Police said an hour before, the same thieves may have stolen three iPhones 6's worth $1,900 from the Apple Store on 14th Street and Ninth Avenue in the West Village.

The stolen iPhones are believed to not have sensors and are unlocked.

Earlier this year, three thieves pulled off two similar but much more lucrative heists at the Upper West Side Apple Store at Broadway and 67th Street, a training center for Apple employees.

Once again, they dressed as Apple employees and stole a total of $49,000 worth of iPhones.

Police, at this point, can't say if any of the heists are connected.

PIX11 News reached out to an Apple spokesman, but had yet to hear back on if there is an effort to tighten security measures.