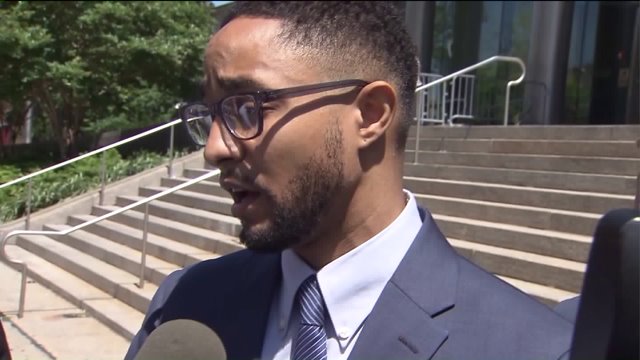 Wellington Clase was all smiles Wednesday walking out of Queens Criminal Court a free man, after spending 6 months inside a Rikers Island jail cell for a crime he did not commit. Clase wasted no time pulling out his cellphone to tell those he loves.

"I am on Snapchat right now," Clase said. "I am letting people know I do not have 25 years hanging over my head anymore."

Clase can thank private investigator Manuel Gomez and his attorney John Scola for helping prove his innocence. It was May 2013 when someone sold an illegal gun to an undercover ATF agent. The entire incident was recorded on video surveillance.

In the video, the man looks nothing like Wellington Clase. The eyebrows are different, the chins are different, and so are the eyes. Clase has an eye condition that prevents his left eye from fully opening.

Yet 27 months after the transaction, Clase was arrested after the ATF agent picked up out of a photo lineup.

"We look completely different," Clase said. "We are two different people. I do not have any resemblance to that guy, in my opinion."

However, the video was never turned over to Clase's original defense attorney, who recommended he take a plea deal to reduce the 25 year sentence he could have faced. Clase did not want to do that, since he knew he was innocent and fired his attorney. He hired Manuel Gomez as a private investigator and attorney John Scola, to help prove his innocence.

The two pointed out the differences between the two men, and the fact that fingerprints were never taken from the gun the day of the transaction, which clearly shows the man without gloves. The evidence was overwhelming, and the judge threw out the case.

"I hope the District Attorney learns from this," Manny Gomez said. "The process of not turning over evidence delays peoples lives. I hope it doesn't happen again."

Scola now plans to sue the Queens District Attorney for damages his clients endured in jail.

Clase, in the meantime, says he is going home to his wife and child.