Sweep negative after threat made against plane that landed at Newark 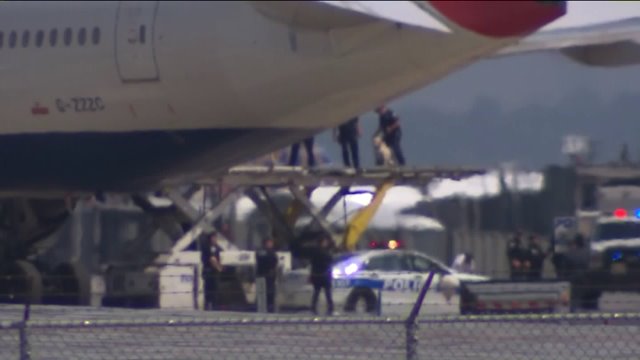 NEWARK, N.J. — The all clear was given at Newark Liberty International Airport Thursday afternoon after authorities received an unspecified threat.

British Airway Flight #185 was en-route from London to Newark when a caller phoned in the threat while it was mid-air.

Passengers were not informed of the threat until the plane landed around 1 p.m.

"No one knew anything until we were already on the ground that's when the pilot came in on the intercom told us there was a threat called and had to use security measures," said New Jersey resident Sean Fitzgerald from Port Monmouth.

After landing, the jetliner was moved to a remote and secure part of Newark. Hours after it landed, police activity could still be seen surrounding the plane. Bomb sniffing dogs were seen being led onto the aircraft.

The threat targeting the flight is now believed to be a hoax. Airport officials say the threat is "unfounded" but the investigation is still ongoing. The passengers were deplaned on the tarmac. Checked bags and carry-ons were re-screened as a precaution before passengers could proceed to the gate.

"We stepped off the plane, handed luggage on the runway we had to back away from it," said Joel Brown from the United Kingdom.

PIX11 spoke with passengers who were on board. Many say after some initial tense moments, the entire process was calm and organized.

"It felt like my first trip to America I feel like I was in a movie sorry I don't mean to be blasé about it," said Mirella Salomone.

206 passengers and 13 crew members were on board when it landed around1 p.m. People said the line through custom was the bigger hassle.

"At the end of a 7 hour flight I had enough I just wanted to get through it's taken years," said Brown.

Earlier in the day, a separate threat on Terminal B was called in to Newark. When asked if the two incidents are connected, Joe Pentangelo, Port Authority spokesman, would only say both threats are unfounded and are being investigated.

"British Airways flight 185 landed normally this afternoon. Security checks were carried out as a precaution. The safety and security of our customers and crew is our number one priority."