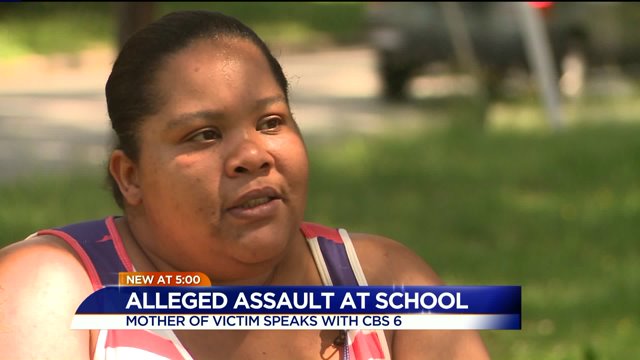 RICHMOND, Va. -- A mother believes several boys at her child’s middle school premeditated an assault on her daughter.

Courtney Allen was beside herself after she learned her daughter was assaulted at school. Now police are investigating what happened at Lucille Brown Middle School, according to WTVR.

Allen said she received a call from a school official to let her know of the “horrifying attack” on her 14-year-old daughter.

"They said four boys lured her into the bathroom, into the boy's locker room, and pushed her in and she fell," Allen told WTVR. “They pulled her pants down, and the others forced her head to their private parts."

Allen told WTVR her daughter screamed and fought back when a teacher walked in. Allen wondered what would have happened if no one would have walked in.

“Because my baby's pants are down, she's struggling trying to pull her stuff up, she’s struggling to get away from them,” Allen said.

Mom said she hasn't been given information about whether the students were disciplined by the school, but said she plans to press charges.

A report filed by Richmond Police shows they are investigating it as a simple assault, with major crimes detectives on the case.

A Richmond Public Schools spokesperson told WTVR the parents were not notified because it is a disciplinary issue:

“School administration is working with our office of safety and security to address safety issues within the school and to implement additional procedures that will provide better supervision in certain areas of the building. Richmond Public Schools takes all reports of sexual assault very seriously.”

Allen said she thinks the school should have been up front with all parents, and notified them that an alleged crime happened inside the school.

“I want other people to know what goes on, and you're not gonna hide this from other parents,” she said. “All of them should know.”