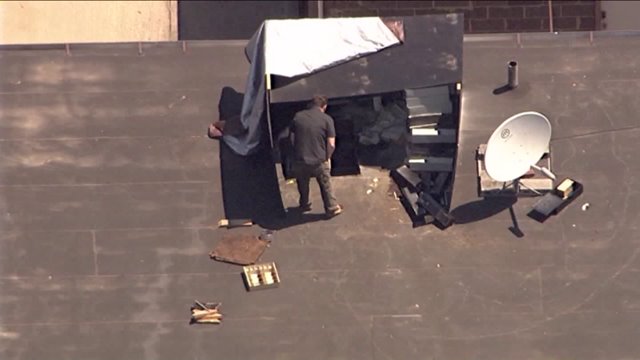 REGO PARK, Queens – It is a plot straight out of a movie: a bank heist in Queens that has both police and bank customers scratching their heads as to how the thieves escaped undetected.

When the bank closed on Saturday, all was fine. But when a manager at the Maspeth Federal Bank along Woodhaven Boulevard in Rego Park returned Monday morning, he knew immediately something was wrong.

It was then the manager discovered a huge hole in the vault's ceiling with dozens of safety deposit boxes missing.

Police said the well-organized and experienced thieves stole a ladder from a nearby home to get onto the roof. They then constructed a wooden box to hide themselves while boring a hole in the ceiling of the bank. That hole led right into the vault where the safety deposit boxes were kept.

One by one, dozens of boxes were taken to the roof, where thieves emptied the boxes of customers' possessions. They then cut a hole in the back fence and escaped, undetected.

The entire incident was not caught on surveillance because the thieves cut the wires before they began, police said.

Concerned customers were locked out of the bank Monday, left to wonder if their belongings were stolen, some pounding on the front door.

"My whole life can be ruined," one customer said.

"I know this can happen anywhere," another said. "But, I want to know if this was my box or not."

The bank remained closed for the day with investigators inside.

The robbery is similar to a heist that happened at a Brooklyn bank in April. In that case, thieves climbed a roof and cut a hole in it, robbing the bank of nearly $300,000. The thieves were never caught.

Police have not said if the two are related but are tracking 10 similar burglaries dating back to 2011.

"Maspeth Federal Savings is a community bank and this burglary really hits home," a statement released by the bank read Monday.