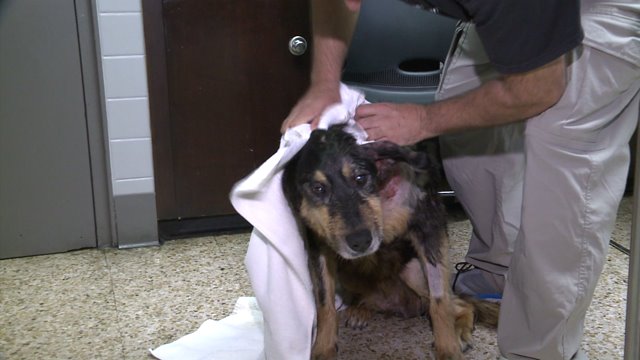 BEDFORD-STUYVESANT, Brooklyn — It's one of the worst cases of animal abuse that even veteran animal rescuers have seen, but it's part of a larger problem in the tri-state.

Pet owners who feel they don't have the financial means to get simple health problems in their pets taken care of sometimes let those problems go unattended, which ultimately leads to the problem getting worse.

In the case of 9-year-old German Shepherd Rottweiler mix Jellybean, that problem is extreme.

"It broke my heart," said Lala Torres, a customer at the Petland Discounts pet store on Fulton Street in Bedford-Stuyvesant.

He was at the checkout counter on Monday when he and the staff noticed Jellybean had been tied up and abandoned outside and her coat covered in scabs and excrement. "It was like seeing a child" in need of help, but unable to ask, said Torres, "but God puts us here for a reason."

Store clerk David Yafou brought the dog in, then he and Torres gave her food and water. "She ate five cans [of dog food]," Torres said, "and five dishes of water."

The dog's left ear was so badly swollen and infected, the veterinarian at Pet Haven could only clean it out, and was still unable to see into Jellybean's ear canal. She'd also scratched her ear, neck and front left shoulder so badly that the area had scabbed.

"This could've been treated a long time ago," Casey told PIX11 News. "It didn't have to get to this point. We're going to try to give her her best shot, y'know?" he said.

Rescuers believe Jellybean may have had something as simple as an ear infection a few months ago, but her owner didn't get it treated. So it spread.

The reason for the neglect may have been a lack of money. At the pet store that rescued her, however, the manager pointed out that twice a month a moderately priced veterinarian comes in to see pets on a first come first served basis.

"It's low cost," said Gilbert James, manager of the Petland Discounts. "So they can come in and check it out."

There are also other, even cheaper alternatives, that the animal rescuer mentioned. He's holding out hope that Jellybean can make a full recovery, despite the sad situation she was put in.

"You have to reach out for help," Casey said. "You can get low cost vet care."

Here are some resources provided by the Humane Society:

For free spaying and neutering:
The Toby Project

For other low-cost or free pet health alternatives:
Humane Society of the United States

Humane Society of the United States: Affording your Pet