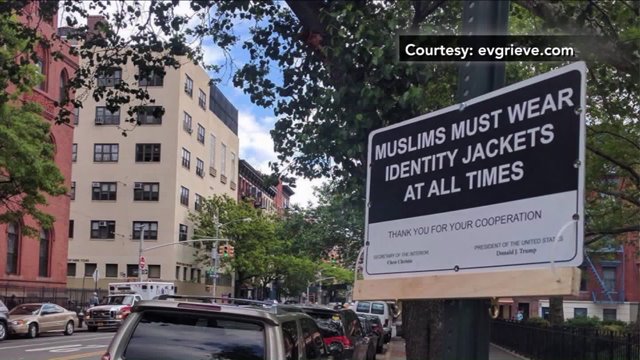 NEW YORK – Political street art has been spotted across New York City as the 2016 Presidential race continues to heat up.

On Sunday a sign was spotted in the East Village that read, "Muslims must wear identity jackets at all times."  It claimed to cite President Donald J. Trump.

Another anti-Trump statement was made on the subway by anonymous artists that go by the name Major Big Time.

"I just thought it would be funny to put pictures of Donald Trump over the people doing bad things on the subway," the artists told PIX11.

"He's reality star, I don’t think we need a reality star President," they said. "That’s a slippery slope, we might have an emoji president next time."

Hillary Clinton has also been the subject of street art. Last month an unknown person put up posters critical of Clinton throughout Brooklyn. "Clinton Stinks" posters were plastered near several of her fundraisers and an artist known as Sabo created posters that depicted Clinton as the cartoon character Shrek.