Lawmakers pressure Port Authority to cut back on pollution 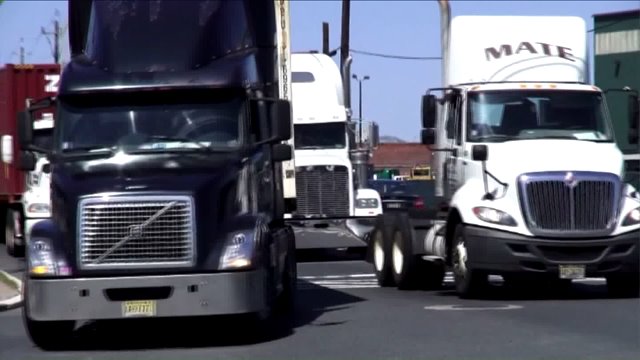 NEWARK, N.J. — Children in Newark and Elizabeth are struggling to breathe and the air pollution is making their problems worse.

Tiyonn Bowers, 9, enjoys indoor school activities, like art or the library. He said outdoor activities make him sick and has been hospitalized and missed school because of this before.

“I don’t go outside that much,” he said.

Bowers suffers from asthma and carries a pump with him. His mother signed him up for a study that also required him to carry an air quality monitor on his waist for months.

“I prefer him not to be out there,” Tamika Bowers said.

She changed the filter on her son’s monitor daily and was shocked to see the results.

The Bowers are among dozens participating in research by Rutgers and the Ironbound Community Corporation. They’ve partnered to study the impact of traffic pollution on asthmatic kids living in cities. The Ironbound section of Newark backs up to the ports, truck stops and trucking companies. Some kids participating in the study have repeatedly missed school because they can't go outdoors, or have been hospitalized.

According to the EPA, one in four children in Newark have asthma.

The New Jersey Department of Environmental Protection has studied air quality around the ports and found an increase in cancer risk.

Lawmakers point to trucks that do business at the ports, as a source of pollution in the community.

The Ironbound Community Corporation counted over 2,000 trucks passing schools or playgrounds within 2 hours in the Ironbound section of Newark. A spokesman pointed to a study paid for by the Port Authority that found that only 5 percent of trucks that pass through the Ironbound are port-related.

New Jersey State Senator Ray Lesniak introduced a bill Monday that would force trucks doing business at the ports to cut down on their emissions.

"These low-income and minority communities are disproportionately exposed to high levels of air pollution resulting in serious health problems,” said the Senators letter. “Fortunately, there are proven technologies that can allow the port community to reduce and eventually eliminate diesel emissions."

“To call it an injustice doesn’t seem to give it enough weight. You really are taking away people’s right to breathe clean air,” Molly Greenberg, the Environmental Justice Policy Manager for Ironbound Community Corporation, said. “They have enough money on their own to do a lot of different repairs that benefit them."

A spokesman for the Port Authority said they have reduced port pollutants by 41.5 percent since 2006 and have invested $600 million in environmentally friendly rail facilities.

"We are firmly committed to continuing to work with the EPA and other regulators in the region to further reduce emissions from the port,” said the statement. "We applaud efforts to take a national holistic look at this issue and are open to federal regulation that would create uniform standards for port facilities across the country.”