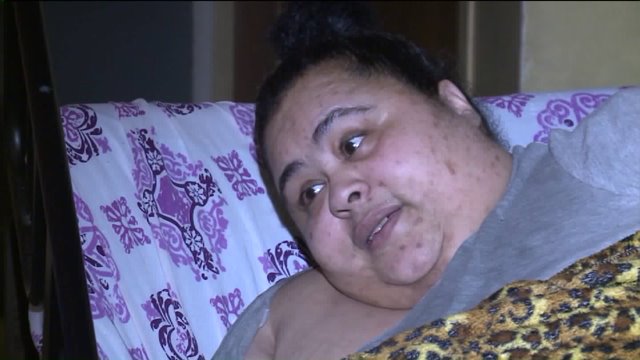 STATEN ISLAND — Josephine Loya has lived in the Richmond Terrace Houses for 13 years.

She moved in with her son when she was pregnant with her daughter.

Loya had a job and life was good.

However, 10 years ago, Loya was diagnosed with a thyroid condition that turned her world upside down.

"Once I developed that disease, I gained weight rapidly," Loya told PIX11 News.

Loya needed a wheelchair to get around. However, her NYCHA apartment was too small. The hallways were too narrow for the 26-inch wide wheelchair. She requested a simple transfer from a non-handicap apartment to one that was wheelchair accessible. That was eight years ago.

Today, Loya is still waiting. Her non-handicap apartment makes it difficult and dangerous for her, especially during emergency situations.

Just a few weeks ago, Loya needed to go to the hospital. When the ambulance arrived, Loya said the gurney didn't fit through the door.

"They dragged me into the hallways and put me on the gurney," Loya recalled.

She said the entire experience was incredibly embarrassing. During that visit, one of the firefighters even told her son that if there was ever a fire in the building, his mom would die.

That was the straw that broke the camels back. Loya hired an attorney to help get her out of the deathtrap and into a new apartment. PIX11 News is now on the case to help get her the apartment she deserved.

PIX11 News called NYCHA and the department said in a statement:

"A safe, clean and healthy home is the right of every individual. NYCHA is working on Ms. Loya's case to resolve this as quickly as possible."

Loya said she doesn't believe a word of it, since she has been waiting for the past eight years.