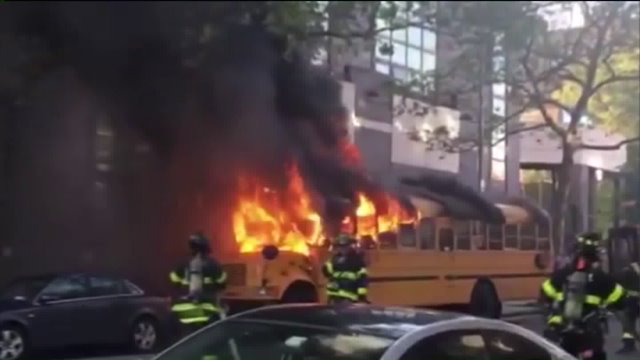 CROWN HEIGHTS, Brooklyn – The boys who were arrested for allegedly setting a yellow bus on fire outside a Jewish elementary school last Sunday will not be charged with a hate crime, NYPD confirmed Friday.

They were arrested Thursday and charged as juveniles with arson and criminal mischief, originally as hate crimes. The hate crime charges will be dropped after it was later determined that there was insufficient evidence.

The boys will be charged with arson and criminal mischief.

An 11-year-old boy already was charged in connection with the Sunday evening blaze.

Video released by police showed five boys near or in the empty bus parked in front of Beth Rivkah Elementary School on Brooklyn Avenue on Sunday, at approximately 6:05 p.m. A witness nearby saw the alleged troublemakers placing cardboard boxes inside and igniting them on fire, damaging the bus, according to the NYPD. The footage then shows the kids fleeing from the scene.

There were no injuries as a result of the incident.

The bus belonged to the Bnos Chomesh Academy, a girls' high school in Brooklyn's Crown Heights. It's a neighborhood where tensions between the Jewish and black communities living side by side spurred riots in 1991.

Additional reporting by the Associated Press.