As Suffolk County DA is told to resign over allegations of criminal wrongdoing, exclusive details of alleged acts are revealed 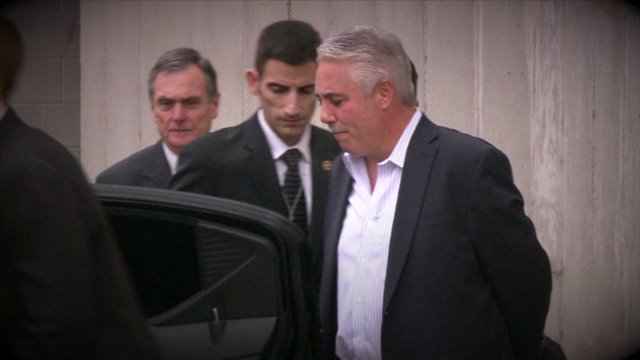 HAUPPAUGE, N.Y. -- It's one of the country's largest and most powerful law enforcement offices, but the Suffolk County District Attorney's Office on Thursday was called a "criminal organization" by the man who ultimately has oversight over it, as he called for the district attorney to resign.

The call comes on the heels of a new investigation that concluded that District Attorney Tom Spota oversaw, for years, a process of his investigators interrogating and intimidating suspected criminals, including political corruption suspects, but not prosecuting them, in exchange for cooperation, loyalty and silence.

It was apparent blackmail that may have allowed serious criminals, including drug dealers known to distribute to high school students, to avoid prosecution.

Those allegations, first reported by Newsday, are consistent with claims made by prosecutors in open court against the former head of investigations for the district attorney's office, James Burke.

If that name rings a bell, it may be because Burke -- who eventually went on to become Suffolk County Police Chief -- is now awaiting sentencing on federal charges that he tortured a prisoner and then tried to cover it up. But Burke's case showed that for years, Burke would have detectives carry out illegal monitoring activities on perceived enemies of the D.A., including wiretapping, placing tracking devices on cars and physically following suspected foes of Spota.

One of them, was Jay Salpeter.

"The only way they could've received that information of where I was, at different times and different days" Salpeter told PIX11 News in an exclusive interview, "was with a tracking device."

Salpeter is a private detective who spent years successfully proving the innocence of the convict in one of Suffolk County's most prominent cases, the murders of Seymour and Arlene Tankleff. Salpeter, against the wishes and will of Spota and Burke, worked tirelessly to prove that the Tankleff's son, Martin, did not kill his parents.

Martin Tankleff had been convicted in 1990 of the murders, but 17 years later, thanks in large part to evidence secured by Salpeter, Tankleff was exonerated. At the height of Salpeter's investigations, in 2004, he received a series of notes whose words were made up of letters cut out of magazines and other publications, ransom note style.

But these notes were about something else.

"I was no angel when it came to my marriage," Salpeter told PIX11 News. The notes detailed "every woman I knew," he said, as well as information about their encounters.

Those notes were mailed to Salpeter's office. When his father suffered an auto injury and Salpeter went to Florida to care for him, similar notes started arriving at his home, addressed to his wife. She ended up divorcing him because of it.

That's because, once James Burke got arrested and subsequently made a plea deal, Salpeter obtained records from the federal investigation into Burke. The records contained documents showing that the Suffolk County District Attorney's Office had clearly tracked Salpeter in ways that had nothing to do with his work on the Tankleff case.

"[One document reads] 'Subpoena all my business records, bank records, credit card records, as soon as possible,'" Salpeter said, pointing to a copy of the document which he obtained. It is stamped with a Suffolk County Government identification number.

"We even [obtained] a drawn diagram from Suffolk County of my house," Salpeter said, pointing to yet another document identified as being from the county D.A.'s office.

Salpeter's claims, for which he has the paperwork backing it up, are consistent with the sorts of accusations the Suffolk County Executive Steve Bellone said at a press conference on the steps of the D.A.'s office on Thursday afternoon.

Bellone said that District Attorney Spota, in coordination with Burke, sidestepped the pursuit of criminal justice at every turn.

"For refusing and blocking cooperation with federal authorities on the Gilgo Beach serial murder case," Bellone said, referring to the unsolved murders of more than a dozen sex workers and others, whose bodies have been found along a remote beach road in the county from 2010 to 2012.

Bellone went on. "For allowing violent criminals to go unpunished in order to protect your friends," he said, "Tom Spota, you must resign from this office."

After that, around 12:45, Bellone delivered a letter demanding Spota's resignation to the D.A.'s office behind him.

About 45 minutes after that, Spota called a press conference himself.

A noticeably stunned district attorney told assembled press, "[Bellone's] call for my resignation is nothing but a personal vendetta against me" for criminally pursuing his friends.

Spota said that he's cooperating with an FBI investigation into a wide array of allegations. He said that he'd turned over more than 500 boxes of evidence to federal investigators, and that he was confident that the "190 prosecutors, investigators and staff" of his office would be found to have engaged in no wrongdoing.

But one victim of the D.A.'s accused wrongdoing differed strongly. "I'm looking forward to the day Spota is in handcuffs," said Jay Salpeter. "I guarantee that's coming."