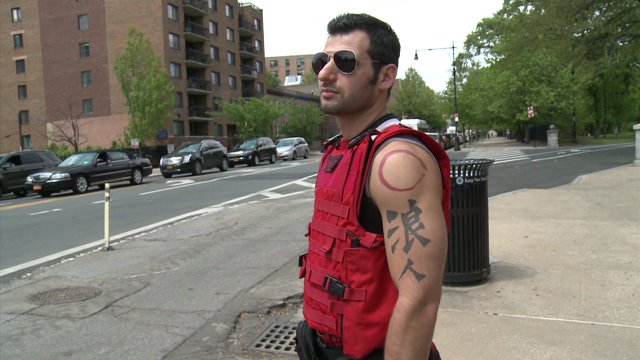 BROOKLYN, N.Y. — Superheroes come in all shapes and sizes.

Some can fly, others are indestructible and all of them seek justice.

In the case of Staten Island’s Chris Pollack, he is on a mission to clean up the streets of New York City.

“We’re going out on the streets to deter crime,” Pollack told PIX11 News. “We’re looking out for people up to no good, we’re getting out wanted flyers, we’re just helping anyone we see in need.”

Known in many circles as the “Dark Guardian,” Pollack and his crew of vigilantes have patrolled the streets in our area for years.

PIX11 first met the martial arts instructor back in 2013 when an idea to launch a so-called superhero academy became reality following a successful GoFundMe page.

Years later, the Dark Guardian is looking to expand in wake of what he calls an uptick in crime.

“There’s slashings going on all the time,” he said. “You look in the headlines you see some rapes, you see some shootings and murders, and there’s a lot
of people out there.”

"So I’m getting out on the streets and I’m looking for these people."
Pollack’s crew, known as the New York Ronins, is looking for recruits who want to make a difference.

“Somebody who is actually physically capable, has some self defense skills,” he explained. “Of course they have to be street smart and be able to deal with people. We’re not looking to get into fights but we are looking to handle situations.”

The Dark Guardian has already stepped up patrols in Prospect Park following a recent sex assault.

The New York Ronins posted flyers in and around the park, searching for the suspect they identified as a “scumbag rapist.”

It’s important to mention, the NYPD does not endorse vigilantes and its something Pollack acknowledges, saying his run-ins with officers are usually them urging him to stay out of the way.

The New York Ronins recruiting event is this Sunday at the Continental Center located at 180 Maiden Lane in Lower Manhattan. For all the details, visit their official Facebook page.