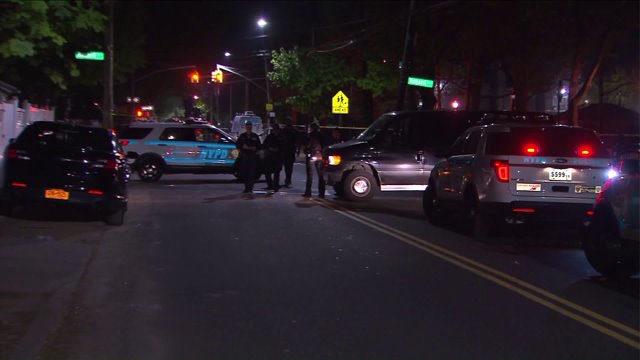 QUEENS VILLAGE, Queens – An armed man was shot by a NYPD sergeant after he pointed his weapon at police in Queens late Wednesday.

The police-involved shooting happened on Hollis Avenue and 217th Street in Queens Village around 11 p.m.

Police stopped the 31-year-old suspect after running multiple red lights in a silver Mercedes-Benz sedan at the intersection of Hollis Avenue and 214 Street, according to the NYPD.

An officer approached the suspect on the driver's side and ordered him to park the car, which the suspect refused. A sergeant opened the passenger door trying to engage the suspect, then the suspect sped off with the sergeant still inside the car, police said.

The suspect drove east on Hollis Avenue and was forced to stop at 217 Street by officers who followed in an unmarked car.

The sergeant struggled with the man, who left the car and allegedly brandished a gun and pointed it at officers. The sergeant shot one round from his gun and struck the suspect in the leg, police said.

EMS took five officers to Long Island Jewish Hospital for evaluation, one officer was also treated for a bite wound on his left arm. EMS took the suspect to Queens General Hospital in stable condition. His charges are pending.

During the struggle, an officer was bitten in the arm by the suspect, according to police.

He was apprehended and taken to Queens General Hospital in stable condition. The suspect, who had a previous arrest in 2004 for drugs, is in custody.

The officer that was bitten and three others were taken to a local hospital for treatment.

Detective Brian Moore was shot to death five blocks away from Wednesday night's shooting in May of 2015.  He was also assigned to the local precinct.