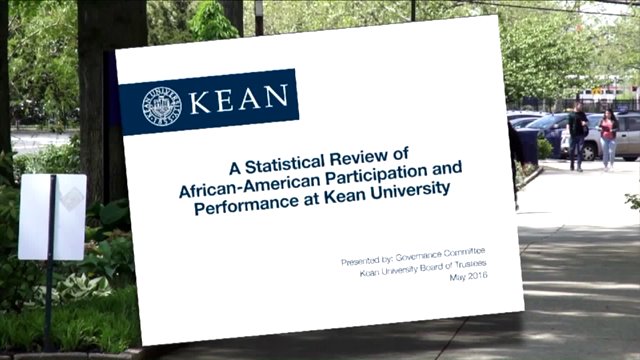 UNION, N.J. — Kean University has released a 122-page statistical report on whether African-American students and staff are treated fairly on campus.

The report was commissioned in December of 2015.

It states that the black student and staff population on campus is higher than at other New Jersey colleges; they promote African American employees at a higher rate than the general population; and Kean's graduation rate among African American students is up 37 percent.

But a recent report by The Education Trust, a non-profit advocacy group, found just the opposite. They say that the graduation rate among black students at Kean is down by over 12%.

Kean and The Education Trust analyzed data from different years.

“Their data is older than what we included in the report,” said Linda Lewis, a Trustee for Kean University and Chair of the Governance Committee which compiled the report.

But the author of the Education Fund report stated that Kean's progress in recent years is making up for years of neglect. They looked at Kean’s report and pointed to how the university chose to analyze different years of data for different topics, for example they looked at scholarships data from 2005 to 2015, but only went back to 2009 when producing statistics on the black graduation rate.

"This calls to question why 2009 was seen as the starting point to the analysis of black grad rates, without mentioning what occurred since 2003. We wonder if this was done to make the numbers look better,” said Andrew Nichols, The Education Fund’s Director of Research and Data Analytics.

Had the university compared it’s most recent graduation rate to the data stretching back to 2003, they would have reported a slight decrease in graduation rates among black students, down by 2.5%.

Kean came under fire early in the process after they hired an independent consultant to help with data collection and the overall framework of the report, Michael Barry Blackwell, 59.

Public records show Blackwell has a criminal history spanning from the 1990’s to the 2000’s, including charges of robbery, aggravated assault and fraud. The Bureau of Prisons confirmed that Blackwell did time at Fort Dix, a federal prison in New Jersey.

“People have a tendency to look at character and history, rather than skill and what people are hired to do. He wasn’t hired to be a saint here,” said Trustee Lewis.

The Kean University report did not include any interviews with students, staff or other stakeholders.

“Overall, it doesn’t address the issues that we have been bringing forward to the administration,” said Professor Castiglione, "And that is, there are too few faculty and too few support staff to serve our majority minority student body and they deserve better.”

When asked why he would link a lack of faculty to discrimination, he said: "It’s clear that the very high ratio of students to full-time tenure and tenure-track faculty would not stand anywhere else. Any other institution, there would be an outcry from the students and their parents. The institution is taking advantage of the students and they’re paying just as much as their peers."

The University’s report did recommend the recruitment of more staff from historically black colleges; to discuss it’s promotion procedures with staff; and to try to bridge the gap between students of different races.

Kean University embarked on this path in the first place after a public protest on campus in November. Security had to be heightened at the school immediately after the demonstration because of one protestor who headed to a university library halfway through, created an anonymous Twitter account and admitted to tweeting threats targeting black students. Kayla McKelvey, 25, pleaded guilty to the hoax in April.

Students who spoke to PIX11 on campus Wednesday said they don't see discrimination as a problem on campus, but they agree that students deserve more support.

“There aren’t enough faculty that are full-time. There is a lot of adjunct faculty and they don’t have time for students usually,” said Isabel Donasciento, a junior at Kean, “truthfully, I think it’s financial.”

Former New Jersey Supreme Court Justice John E. Wallace, Jr. has been hired by the Kean Board of Trustees to review the matter of discrimination on campus. His findings are due out in the coming months.